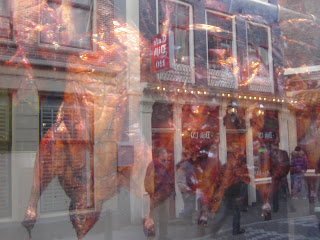 The other day on here, I mentioned a letter I'd gotten that "invited" me to sign up for an obligatory integration course. Interestingly, I got three emails regarding that, but no comments. I thought I would tell the end of the story.

Fred called the number on the letter and spoke to "Samira" who told him that all I had to do was scan in all the pertinent documents and email them in - "Attention Samira." So that's done. Samira said that they had gotten a list and were just inviting everyone. I think it's an outside agency. It's a ridiculous system. Fred was a little nervous about calling. He said, "What if they ask why I'm calling and not you. Maybe they'll think you can't speak Dutch and that you're not integrated."

I said, "I have a paper that says I've done the course. Who cares if I can't speak Dutch if I passed the course? Tell them that I'm working. That's the whole point, isn't it?"

Years ago, I was lectured regularly by a guy who had gone through the whole imburgering (integration) course three or four years before. He kept talking about how it went and what the rules were. I knew even then that he was "full of stuff" (as the mother of an ex-boyfriend of mine used to say). They change the rules all the time. So now here's this new rule that everyone has to do it. Years ago, if you were American and moved here independent of a Dutch person, for some reason, you didn't have to do the course. Now you do. (Which makes much more sense.)

I was listening to Cast On with Brenda Dayne this morning. She was talking about the meditative qualities and benefits of knitting and doing something repetitive. Something about that made me drag my aran sweater out of the bag and finally start on it again. I've got a lace project I'm want to start and I need to finish this.

The sweater really is a lovely project. It feels really nice and it looks good. I hope it'll fit, but even if it doesn't, I need to finish it. I'm going to fix some mistakes that were bothering me and then knit it up. It'd be nice to wear it a couple of times this year. We'll see how that works out.

And finally, apropos of nothing (I think that's a great blog title and some dork took it and quit blogging after a couple of times. Similarly, the numb skull who has andybaker.blogspot.com hasn't blogged on it since 2003!) Anyway, apropos of nothing, we are having a meatloaf tonight that is so amazingly good that I think everyone who eats meat should try it. It's called Dad's Meatloaf with Tomato Relish. By the way, The Food Network is one of my favorite places to look for recipes. I recommend.

The name of the meatloaf reminds me of the dad in my life who used to make chocolate cake in a sheet pan and then he'd take the handle of a wooden spoon and punch holes in the cake before pouring on the chocolate frosting that he'd made. That way the frosting is not just on the top, but actually in each piece of cake. It's all in the details. He wasn't much in the kitchen, as I remember, but he had his tricks.

I'd love to rewind today and do the whole thing again. It's been a good day. And we're going to a party later.
Posted by Andy Baker at 6:40 PM