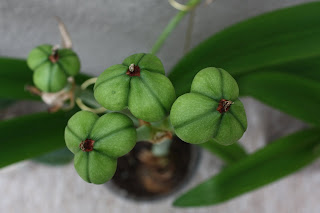 Not being Irish, and living in a country where that holiday is pretty much ignored, this is my offering for St. Patrick's Day. Or St. Patty's Day. The Patty I know is certainly a saint.

The Amaryllis bulbs we got for our wedding grew, bloomed and then turned to these. I think they're sort of beautiful. Fred thinks that the "flower part" has officially retreated to the bulb and that I can safely cut the very healthy stalk and throw these away because they contain nothing. I think they look like the kind of thing that would be tasty sauteed up with butter and a little garlic. Not to worry, though, I won't eat them. They just look like they'd be good. And I'll leave them standing for a while because I like looking at them. I could Google it and find out what to do...but wouldn't it be easier for someone to just tell me?

Last night a few of us (me and some ladies) did some dyeing. I took a skein of white Cascade 22o, added a little cherry Kool-Aid and nuked it for a few minutes. (Full disclosure: I also added a little lemonade Kool-Aid because I initially wanted to try to get a mottled effect. It didn't work.) Then I took some grape Kool-Aid powder and sprinkled it on here and there and nuked it again. I came up with this: 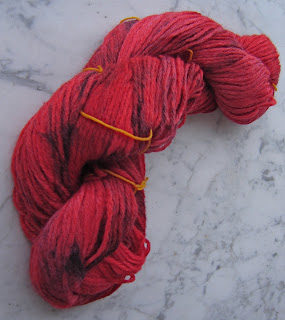 It was okay. Nothing fabulous. It was red. A little too orange or pink for me in spots, not completely saturated. I like the purple, which reads sort of black. It would be good for a hat or something. This is it still wet from sitting in a zip-lock bag all night. I'm less than thrilled with it because Malia got a really deep cherry red. But she boiled hers, she didn't mix colors and she might have started with a tan yarn. Anyway, I was coveting her color. I wanted a deeper, more saturated color.

This morning, I decided to take my little bag of red onion skins I'd been saving and some vinegar and see if I could over-dye the skein to get something deeper. I simmered the skins (just the dry part) and a couple of splashes of vinegar for about 45 minutes before removing the skins and putting the yarn in. I simmered the yarn for about an hour and then put it outside to cool. 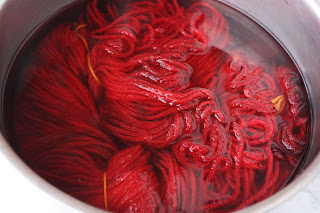 The yarn soaked up a lot of the color of the water, which was sort of a rusty red-ish brown. I let it cool for a while and then I rinsed it out. It seems darker, certainly more saturated. If I could just keep it in the water, I'd be very happy with the color. 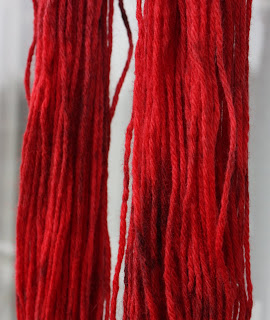 This is it hanging up to dry. I like it enough. We'll see what happens when it's really dry. I'll make a hat. I have something I want to try. Whether or not I'll wear it remains to be seen. I wouldn't have worn the color of the yarn last night. This seems almost doable. I hate to admit it, but I think the color in the photo is a little more intense than the actual yarn now hanging on the balcony. I could always dye it again if I really don't like it.

Suddenly I'm curious about dyeing yarn. I have a local supplier for reasonably priced yarn. I want to see what I can do in terms of things you can get from the grocery store. Supposedly you can get a lot of nice colors. We'll see. Might be just a bunch of tans and browns.

This afternoon I sat on the balcony with my face in the sun, just like a real Dutch person. I think I need some sun for my disposition. And a little color wouldn't hurt.
Posted by Andy Baker at 12:27 PM

They're seed pods. You should cut back the stalk and leave the leaves, so it gets some sun to regenerate the bulb. After the leaves have died off on their own the bulb can be taken out of the dirt and put in storage and replanted next year. We've done it a couple of times, but the second year it was much smaller than the first.

What steph said. The seed pods take a good bit of energy away from the bulb.

Thank you, Steph and Mel. The stalks are cut and the pods are in a bowl drying. And I told Fred he was right.