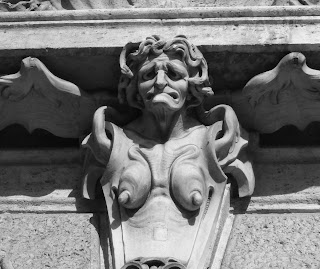 This was something we saw in Rome. It's a serious piece of art on a doorway. It wasn't like a joke piece. Isn't art a wonderful thing?

Warning: This is could be political. You might not want to read this.

I decided that for today's post, I would write about three political pundits/figures who I think are fools. There are a number of people who I'm tired of seeing or who seem to be spewing hate every time I hear them say anything. I rarely see them as entertaining (as certain people are able to do) because I know that some people (some of whom I am related to) take them seriously and think they are the voice of reason. It would be nice to have the freedom to think that they are just fools (i.e. silly people) instead of hateful voices that actually have influence on a certain percentage of the public. Pity.

Fool #1 - Ann Coulter: Fortunately, Ms. Coulter has become sort of inconsequential these days. Her books don't sell as well as they used to and she's loved only by people on the extreme right wing. Still, she irks me to no end. I cannot see anything appealing about her. I watched her appearance at the recent CPAC thing. She's just a comedianne. She has some funny lines, but she's filled with hate. She's gross.

Fool #2 - Rush Limbaugh: I get an eyeload of Rush's nasty self from Keith Olberman when Rush says something particularly hateful or noteworthy. I can't imagine listening to him on a regular basis. What would that do to your brain over time? My father (bless him) once said that the three people he admired most were (in this order) Governor Bush, Rush Limbaugh and Paul Harvey. You can tell how long ago he said that. I was secretly disappointed that he threw in Paul Harvey because the other two were such amazing icons of stupidity. It would have made a better story if he'd have come up with a third more in line with the first two. But that's the story, and I'm sticking to it.

Fool #3 - Lindsey Graham: There are a number of Republican senators who give me the shivers - John Boehner for one - but Mr. Graham gets it because he's such a weak looking guy. He seems like the kind of guy who couldn't be counted on to carry his end of a couch to move it across the room. And one top of that, he looks like a closet case to me. There are few things I dislike more than a closet case. He's also a total water carrier for the Republican big wigs, which he'll never be. When he talks I feel like he's just saying what he was told to say.

There are a lot of people I wish would go away. Most are these Republican obstructionists who are just fighting against Obama because they want to set the stage for a Republican resurgance. It's awful. I don't think they care anything about the country. If there was a big hole and all of these people were to fall into it, I'd be totally fine with that. At least then we'd have a new wave of people and not these same old faces.