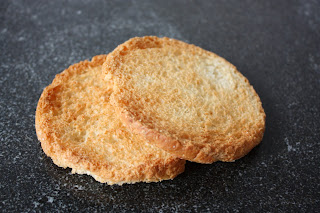 I recently wrote about the beschuit as a phenomenon among my students. The beschuit bought in the supermarkets here are mass-produced and tasteless. I'll eat them if they're in the apartment, but I don't really go out and find them. They're mostly a vehicle for whatever is on them and they're difficult to eat with little pay off. However, my friend, Ann, told me about some really good fresh baked beschuit. And the last time Ann and I had coffee, we swung by the bakery to pick some up.

These are not just the best beschuit ever; they are the best versatile crunchy bakery treat around. They're buttery and crunchy and a little uneven, so there's visual appeal. They're good alone or with jam or peanute butter or cheese or anything. I ate a whole sleeve during the course of a day.

The name of the bakery is Brood. It's at Zeedijk 66 in Amsterdam.

We'd met initially at De Bakkerswinkel. We tried the one on the Warmoesstraat. It's got a nice look to it, but it feels a little "close," as my friend, Dalia, would say. Ann and I had a coffee and talked a bit before moving on. We ended up sitting on a terrace by the water and in the sun. It was a beautiful day last week.

On our way home, Fred and I talked about our choice of pastry. (He'd chosen the Duch apple pie.) He said that he never chose the moorkop because he didn't like all the whipped cream. It's a well-known pastry, apparently, that was not covered in Inburgering class. The name, moorkop, according to Fred, means "the head of a black man."

I said, "You people really still call something the head of a black man?"

I hear ya. I just don't think that the PC police in the US - especially NYC - would be okay with serving the head of a black man at a bakery. And that's sort of where I'm coming from. This place has a very different history, in terms of race relations, from the US. Most people don't hear things like that in the same way I do. Maybe it's just a knee-jerk thing for me. Hopefully, I can adjust.
Posted by Andy Baker at 5:49 PM

With all due respect to Fred, wouldn't a better translation be "head of a Moor"? It might bother you less that way?

In a way, it's not so different from the Spanish place name Matamoros, which literally means "Moorkiller". This story made me think of David Sedaris's piece "Six to Eight Black Men". If you haven't read or heard it, I highly recommend it.

Oh, a biscuit world, isn't it!
I have discovered Amsterdam from another pont of view with this blog! I'm studying English and each of us has invented a character and created a blog just to practise the language, and here I'm looking for information in English! But here I've discovered not only a way of learning English but also a way to see how is the real Amsterdam, its daily life! What would you recommend to go if you want to visit the city but not only the most touristic places? Just in case I sometime go!

we used to call them chocoladebollen, where i grew up. (brabant)

In the Middle Ages there were some pastries and names of foods related to peoples' origin/ characteristics. In the NL you also find "Negerzoen". I am okay with that, cause I do not think everything in this life you have to take soooo seriously and politically correct. In Brasil you have strange dubious sense names for sweets such as "mother-in-law's eye", "little breasts of a virgin", "girl's saliva", "little kiss", etc..

To be honest I don't think a lot of people still know what Moor means. And Moor actually doesn't necessarily mean black man. Usually when Moor is used what is meant are the Islamic people who conquered Spain in the middle ages.

eToro is the #1 forex trading platform for novice and advanced traders.