Three Quarters of a Century 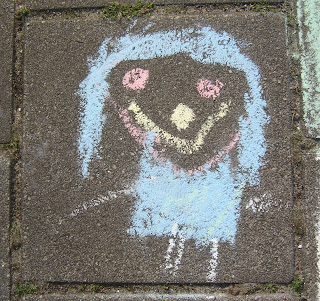 I saw this drawing on the sidewalk the other day. It immediately reminded me of my mother. Maybe it was the blue hair. Her hairdresser over did it one time with the "blue-in" - what's that stuff called? If you use just a little, it takes the yellow out of the hair and makes it look clean and white.

My mother happens to have been born in the same city on the same day as Carol Burnett, which I thought was a pretty big deal when I was growing up and Carol Burnett was a big name. By the way, that city was San Antonio, Texas. My grandparents lived in Charlotte, Texas at the time.

This afternoon we went to Haarlem to a birthday party for Fred's brother-in-law. On the way, we noticed a couple of shops that are open. One was a butcher. It had a sign out front advertising Nieuwe Warme Paarden Worst. That's New Warm Horse Sausage in English. It always makes me pause when I see that. I can accept it. I would even try it...in the right context.

Then at the party they were passing around little snacks while we stood and drank our drink of choice: wine, beer, soda, juice, etc. On one of the plates, one of the snacks was a piece of meat (I presumed it was ham) around a quarter of boiled egg (sliced lengthwise) and the other was a sausage wrapped around a quarter of a pickle. I chose the sausage-pickle combo. There was a lot of other stuff as well.

I commented to Fred later that I would have preferred the ham, but I didn't want the boiled egg. He said, "That wasn't ham. That was horse meat. That's a traditional hors-d'oeuvre."

Apparently, Haarlem has a little history with horse meat. I've said it before, so I know I'm repeating, but Fred said there was a really good horse butcher in Haarlem when he was growing up. And Fred didn't grow up in the 1700's. That was the 1960's.

There's something barbaric about eating horses. (Does the name Fury, National Velvet or Black Beauty ring a bell?) Fred has a couple of friends who won't eat "anything you can pet." It's a rather ambiguous category, in my opinion. For instance, they won't eat lamb or goat and they won't eat duck. I can see petting a lamb or goat, but who pets a duck? They'll eat chicken. To me, chickens are much more accessible for petting than ducks.

They'll eat beef - and I've told stories about cows being faithful pets. And I think they'll eat pork. (Charlotte's Web - just sayin'). Of course they won't eat cat or dog, but it's a mushy rule to me. Anyway, it only affects Fred and me when we have them to dinner and we can't make some nice lamb dish Fred heard about.

My mother will eat all meats - except crazy ones. She's very Texan and enjoys meat, but she's particularly fond of sushi these days. She's spending a quiet evening at my sister's house this evening. Happy Birthday, Mom.
Posted by Andy Baker at 11:10 AM

Need To Boost Your ClickBank Traffic And Commissions?