Last week, I leaned on my handlebars and felt them give a little bit. Then I did it again two days ago. I thought that a bolt (or screw) was loose and that they were slipping a bit. When I tried to bed them back up, it wouldn't budge. Then I looked at the front side of the vertical bar of the handle bars. 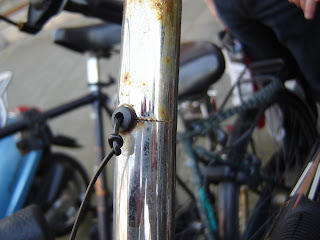 Apparently, it's splitting and it's going to break in half at some point. The hole probably didn't help. It lets water in. And the crack is rusty. It's probably been a while coming.

I cannot imagine what a nightmare it would be if I was riding along, and I pushed down while I was on the road and it bent down really far or broke off. I would be a horrific wipe out. It could be ridiculously gory. I rode it today, but I was very conscious of the weak spot. We're going to take it to the bike shop tomorrow. We bought it there. It's been two years, but you'd think a Dutch bike should last a little longer than two years.

I don't have a car, but my transportation still needs to be maintained.

Fred's third meringue (a few days ago) didn't work out. It was too dark and raw in the middle. This afternoon, he made his fourth meringue. It was just the slightest bit cream colored (perfect) and he let it sit in the oven until it cooled all the way down. It was raw in the middle.

He just put his fifth attempt (the second in a day) into the oven. It's going to sit in 90 degree C oven for an hour and a half and then in the oven until it cools down. He made it fairly thin. It's also now on baking paper and not the silicone thing we have for baking. I like that he keeps trying. I keep telling him. "Try again."

Well, if it's just the handlebars, it should be a simple enough matter to replace them, right? Certainly less costly than a new bicycle.

Just went for my first ride in years - bought a used bike this week. I've figured that I can run most of my local errands by bike, with the supermarket being the longest ride at about 12 miles round-trip.

The handlebar on my bike sheared off a few months ago - it was quite exciting at the time... Anyway, I got a new handlebar no problem - it was all done the same day and didn't cost all that much.

I think meringues ought to be a bit gooey in the middle - they taste better that way. But they're always a bit hit or miss - even experienced bakers get it wrong from time to time. I bet you've had fun sampling the attempts to date though.