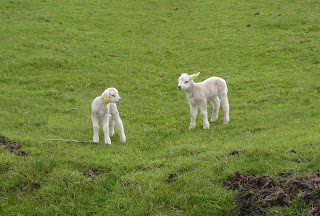 So much of my job involves getting people to talk. It's amazing to me how much of the time I spend talking to people and taking notes - and getting paid for it. And sometimes I repeat a lot of the same lines and tell the same stories, which I think is completely permissible in situations like this job. Years ago, I heard Jerry Seinfeld talk about telling the same story over and over (like during a stand up routine) and making it sound new every time. I did that a lot today.

I can't stand when I hear someone tell the same story over and over. Years ago, I worked with a woman who would do that. She'd have a fabulous story and go through the hallway door to door telling her story to every one individually - in the same way. She even used the same pauses and inflections every time. It was like she was trying to perfect the story by rehearsing it to each member of the staff.

One of my jobs today was to do nine twenty-minute interviews and assess the level of English of each of the prospective students. I found out during one of the last interviews that the earlier ones had been talking to the later ones. I had been afraid of that and I was switching it up and constantly asking different things, taking the interview into different directions. It also helped to keep me interested.

Some people are so easy to talk to. There is an immediate connection and lots to talk about. But at the end, a woman came in and I knew immediately which group I would put her in and what I would write about her and I was sort of finished with her in about two minutes. But I had to sit and talk to her for another ten minutes. (And the entire conversation did nothing but confirm what I had already decided.)

During the first part of the almost four-hour marathon, I felt like I was right there, asking questions, remembering something they said and referring back to it, etc. I was on point. Then with the last woman I just stopped and I couldn't think of anything to say. Apparently, I had reached my limit. Fortunately it was time to go. And I don't have to go to work tomorrow!

By the way, my friend, Patty, is being operated on tomorrow. So think "good health and recovery" and send it to her now, please. I talked to her yesterday. She assured me she'll be fine, and I believe her.
Posted by Andy Baker at 9:17 PM

I know exactly what you mean- I uses to teach English in Istanbul, and the repetition of asking the same questions over and over again, or teaching the same lesson over and over to different groups gets repetitive, even when you know it's fresh for them.

I love that lamb photo at the top! Who doesn't love a photo of lambs frolicking in a field.