On Wednesday, I decided to take all of the red onion skins that I'd been saving and try dyeing a small skein of wool that I had.

We had a lot of red onion skins because we had some people to dinner and we made a Red Onion Tarte Tartin. It was just a matter of baking the sliced onions with some herbs for half an hour and then putting them on little individual baking tins with some dough over it. You serve it by flipping the whole thing over so that the dough (now crust) acts like a little bowl. Top the whole thing off with some bits of goat cheese. I liked it a lot, but the only comment was, "What kind of cheese is this?" (You don't repeat a recipe like that unless you really need to.)

So there I am with all these onion skins (about 20 grams all together - just the papery outer layers) when I had a free afternoon. I boiled up a couple of liters of water, put in a dash of vinegar and then threw in the onion skins. I simmered them for about an hour. I could see the water was a really nice red wine color. I scooped out all of the onion skins I could and then dropped in the pre-soaked wool. The wool was a pale yellow superwash. I'd dyed most of it before, but I need a little more to finish something and I don't like this yellow - although I've been told my a neutral party that it's a fine yellow. 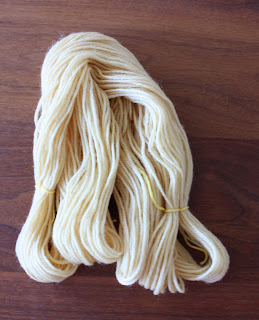 I let the wool simmer for about an hour. I could tell it had taken up a lot of color, and was taking up more the longer it sat there. I threw in another small hank of some boring gray superwash that I'd bought years ago. After another half hour, I took them out of the water and let them cool. I rinsed them and put them outside to dry for a while. 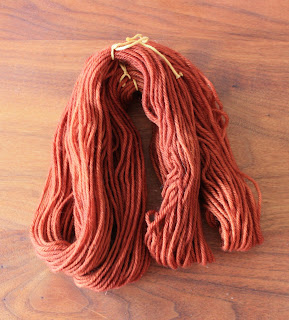 The color is really nice - it's a little richer than it looks in this picture. I really like it that it all came from onion skins. It makes me want to collect white onion skins, red onion skins, scallion skins and garlic skins and do some experimenting with dyeing. In my fantasy experiment, of course, everything is the same - the only thing that changes is the type of skin. I'm curious about other food or kitchen products and dyeing with them. We'll see.

I promised someone some 4 x 4 green squares. I have to get on that little project. Looks like I've got an agenda for this weekend's knitting.
Posted by Andy Baker at 7:35 PM