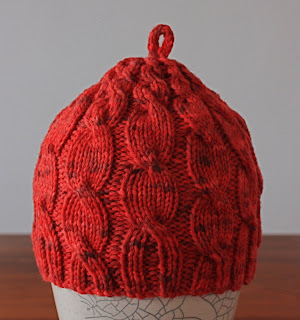 A week or so ago, I posted a picture of a hat I had knit with some Cascade 220 that I had dyed with some friends at a dyeing party. In short, I cooked it in cherry Kool-Aid, and then sprinkled on Grape Kool-Aid powder. It knit up really well. I like the color variations. 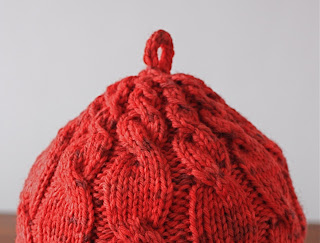 These are not the best pictures in terms of color. It's a nice red with less orange than is in these pictures. I like the pattern. It's called Sarah's Cabled Hat. It's not rocket science, but I didn't know how you made cables reduce like that until now. (I mean, I could have figured it out...) 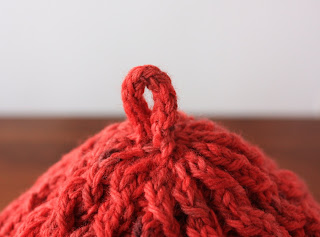 And I put a little loop up there because I can't help myself. It's for a kid, or someone with a smaller head than me (...so that could be almost anybody.) I've dyed stuff a couple of times now and I always feel like I have to knit it up after I dye it. That said, we have another dyeing party coming up, so my aran sweater may continue to languish. The dyeing group is an intimate group, which is good in terms of the size of the kitchen. Too many people shuffling around there would be "crazy making," as Bad Barbara used to say.

Speaking of crazy making, today is my father's birthday. He is a very interesting fellow. A great guy. You'd love him. We don't get along. I love him and respect his conviction in what he believes, and I'm sure he loves me and feels the same about my convictions (well...maybe), but at this point in time, we have very limited communication, which is probably for the best. So happy 74th birthday, Dad! (I've heard his wife is an occasional reader.)

I'm getting quite a collection of baby/children's hats. I have to figure out what to do with them.
Posted by Andy Baker at 5:05 PM

My dad and I have a hard-fought truce happening, thanks mostly due to his wife, who I happen to like a lot. Both my parents re-married people that I genuinely love. Doesn't really make up for the lack of a good relationship with my actual parents, but it's a start.

As for your stash of kids hats, well, we're kind of far away, but if you ever feel like posting something to the USA for nostalgia's sake, I've got two beautiful girls, 2.5 and 5.5.