Eight Hours of What? 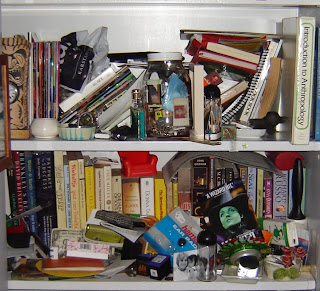 I spent the greater part of the day organizing. It wasn't this particular little corner of my world. I got to that months ago. This one was in a closet, so it's easy to ignore it. And I didn't go nuts on it because there's a part of me that likes a limited number of shelves with a constantly changing montage of tiny crap, cards and pictures.

The stuff I organized today was work stuff. I have an amazing amount of paper in my life. Printouts and photo copies were in a couple of places throughout the apartment in little stacks. It was sort of centralized, but now it's completely pulled together. And there are books. Lots and lots of books. What I finally did was clear off a shelf and move a lot of other books (read: novels and non-fiction) to the cellar and some (knitting and other reference books) to a drawer where I can get to them easily if I need to.

Then I started going through paper and sorting them into piles. It took hours. It's mostly exercises on things like use of prepositions or idioms and expressions, etc, etc. I've managed to accumulate a lot of stuff, most of it good. People have sent me exercises and I've found things on the Internet. It piles up.

Organizing it in a way that I can use it has been my big challenge. I've had a couple of systems that didn't work because they were hard to use or inconvenient. I'm very much from the school of thought that if you can't find it of it's hard to get to, you might as well not have it. I found some excellent stuff today that I'd misplaced and that I'll want to use again. And now it's organized in a nice expandable binder. I've still got a ways to go, but I made some really good progress today.

Strange how at the end of the day all I have to show for all of my effort is some organized shelves and a lot of recycling, but I feel so good. Amazingly, I didn't knit the whole day. Generally, if I have a "day off," I'll sit and knit for at least some of the time. But I stayed on course pretty much.

Throwing stuff away feels good, but I won't throw stuff away indiscriminately. I've done it and then the thing I'm looking for it gone and I hate it. I knew a woman whose husband asked her to go through some boxes in the garage. She put it off and finally said, "If I haven't gone through them yet, I don't need it. Just throw it away." Later, she realized it was stuff she wanted, year books, pictures, important documents. It gives me the shivers to think about that.

I've had a few fits of organization in the past few months. I organized all of my yarn and then I organized the box where I keep all of my important documents. I think a lot of people (certainly not Fred) think of me as organized and I want to live up to that. I'm going to try to get up tomorrow and catch the fever again.
Posted by Andy Baker at 9:14 PM