Our Day at the Keukenhof 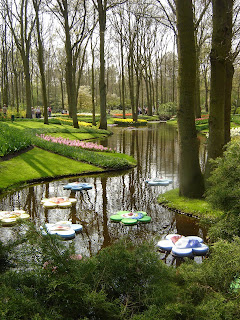 We got to the Keukenhof yesterday about 12:30. The front gate, as I reported yesterday, was a mob scene - a geriatric mob scene, Fred insists. Lots of white hair, including our own. Logically, you think, who else is going to go to a garden on a Wednesday afternoon? Of course it's a bunch of retirees. And there were lots of people in wheelchairs. Some, of course, were the geriatrics, but not all. There were also families, people under retirement age, and French and German tourists. But we stood in line so long to get tickets that the number of older people (our companions for the wait) made a big impression.

Speaking of the line we stood in, we were in it for about forty-five minutes. It was a mess. There was one cashier, then two, then finally three, but the line crept along. Fred swore off ever visiting again because of it. People pushing and breaking the line to get from one place to another. It was a pain and it really tried his nerves. If only there had been a way to buy tickets online. If only. If only.

Today, Fred came across a coupon for €1,50 off a ticket (normally €13,50) and a website address to get tickets online. (Being 65 only got you €,50 off the price of a ticket.) Similarly, his sister, Vera, told him that Wednesday is the day De Zonnebloem takes the geriatrics and disabled people (differently-abled, one might say) to the Keukenhof. Oh. Learning is fun isn't it? 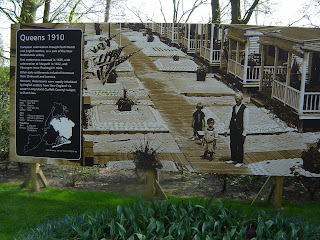 The theme this year is the 400 year anniversary of Holland's relationship with America. There were some things here and there, but it didn't really come across to me that they'd done a lot. One thing that was interesting were the billboards. One for each of the five boroughs of NYC. Look at Queens in 1910. 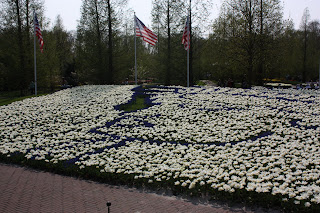 There was also a bed of flowers that was meant to look like...the head of the Statue of Liberty. You can see it if you know what it is, but they should have had a platform you could go up so get a view of it. Pity. 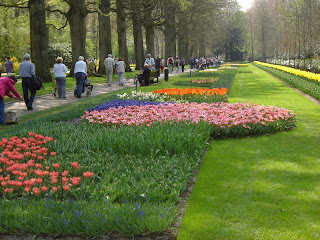 The thing that struck me was how big the place was. There are beds of flowers and flowers in long lines. Most of it is neatly and artfully done. They must have an army of gardeners constantly trimming and plucking. Again, some flowers were not quite out and some have obviously bloomed and gone already. There was a signs that tried to keep people on the sidewalks that said, "Please do not walk upon the grass." And upon the grass we did not walk. 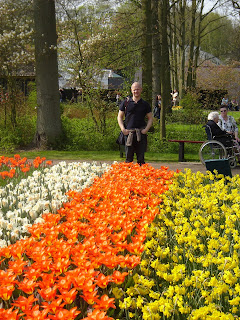 Here's the requisite picture of Fred. 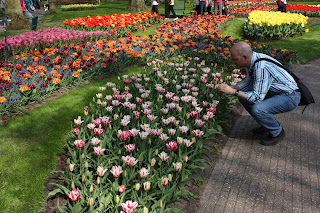 And one of me. There were beds of flowers all over the gardens and all of them were labeled. I've been to rose gardens where all of the roses are labeled. It's helpful. And sometimes the names are very interesting. There's a very orange, very standard tulip called the Willem-Alexander. Probably named for our crown prince. 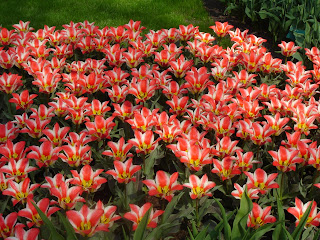 There were also these, called the Plaisir. They're just red and white and look like a child's drawing. They were my favorite of the day. They don't look like much here, but I'm big on stripes. 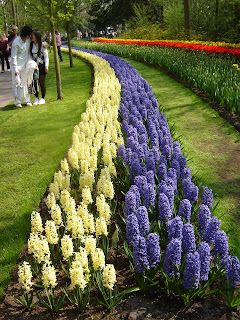 While snapping these rows of hyacinths, these Japanese kids wouldn't move, so I had to take the picture with them in it. As Winnie Mattie would say, "That's the way it looked." 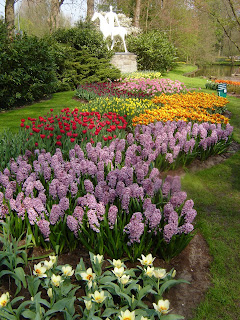 More beds of flowers. It's just endless flowers and people. We took lots and lots of pictures. I've heard about the Keukenhof for years, but I've never gotten any sense of what it looked like, so I'm probably overdoing it with the pictures. There are worse things. 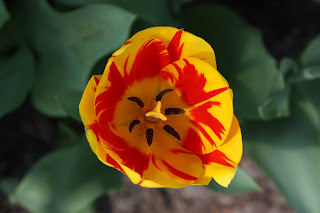 Our new camera takes good pictures close up. Fred wants a new lens, but he doesn't know what he needs. I got him a photography class for his birthday. He'll enjoy knowing more about how to use the camera. I'm good with the smaller camera. These close up pictures scream "Old Queen" to me, but they're really pretty and it's difficult to not do it if your camera will do it. 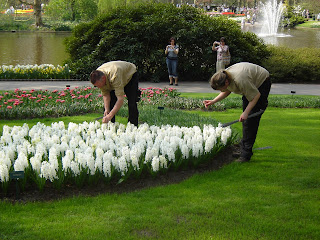 In an interesting peek behind the curtain, we saw these two gardeners sticking little wires into the hyacinths in this bed - you know how top-heavy they get. I swear the whole place is constantly being kept up by neatly dressed people. It's sort of Disney-esque without the story book quality. 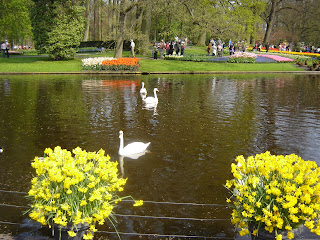 There were some swans in the lake. Swans are beautiful, but sort of mean. They always remind me of my father's second wife in that way - except she wasn't beautiful. 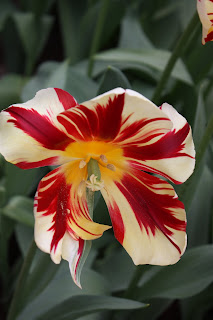 This is Fred's favorite picture of the day. The lighting and everything really worked out. It was such a lovely day. The whole time, I kept thinking of people who would enjoy being there. Apart from all the crowds (and it really could have been much worse), it was a very restful day.

We had a big breakfast and then we ate off carts while we were in the garden: a broodje Unox (hot dog), a hand scooped ice cream and a Belgian waffle. Lots of junk food and plenty of places to eat - even real food.

By the way, we rode our bike there, but you can take a bus and then rent a bike to go look at the tulip fields, if you fancy that. At any rate, you should go. It's important to see beautiful things.
Posted by Andy Baker at 9:27 PM

I absolutely know now that I can NEVER get enough of your pictures of these beautiful flowers. Send me a few so I can have them for my own. Or can I get them from here? Either way, it's beautiful!!

I was in NL recently visiting Dutch friends. I said something about the Keukenhof and one of them said, "You are not old enough to go to the Keukenhof" He's 62 and I'm 51.

We got combi tickets which covered the bus from Amsterdam and entry to the park - no queue to get the tickets and straight in when we got there.

Have you and Fred been to the Hoge Veluwe yet? (www.hogeveluwe.nl) Okay, very different from the Keukenhof (I'm 38 and have never been! nor to the bulb fields) but I love the 'accessible art' part of it, if that makes sense. The kids and I usually go whenever we're in Holland, as they love riding the white bikes. And the fish salad at the restaurant (Koperen Kop) is lovely for lunch.

Fred has sort of been obsessed about going to the Hoge Veluwe since I talked to him about it. It seems like a nice destination for an outing, so we're definitely going soon. Thanks!