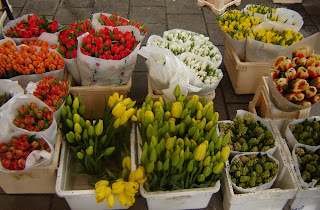 We sat down at 8:15 this evening and I think it was the first time I had really sat down for any amount of time today. We were going from when we got up.

Fred made two cheesecakes today because he was testing out a recipe (for the second time). It worked beautifully and the second today one (the third in total) is for tomorrow. I was talking to a friend about it and he said, "Ooo! A good New York style cheesecake?"

I said, "No, it's got soft cheese, whipped cream and white chocolate and it goes in the refrigerator for a couple of hours."

He said, "Oh. Hmm. A Dutch cheese cake where it's sort of a pudding thing?"

It's actually pretty good. It's not a mix. It is possible to screw it up. However, after three, we've pretty much got it down. And, apparently, there's a Dutch cheesecake. That's a new one.

On a completely different note, before we got started today, I was checking my Twitter account (because I'm so cool that I'm on Twitter - please read with heavy sarcasm). One of Rachel Maddow's last posts was about why she loves train stations. She linked to this video. It's completely beautiful.

I swear to you - when it ended, I was completely teared up. It took me several places. I recommend it.

In other news, I need to find some good people to follow on Twitter.
Posted by Andy Baker at 8:34 PM