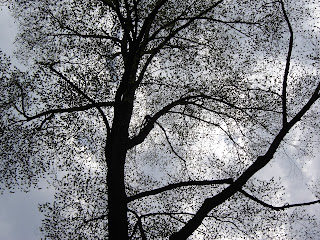 I was growling like a sick dog all day today. Well...actually, I waited until church was over and then I became...cranky. For the record, I just hate being trapped in a mood like that.

Alastair and I always stay behind when the choir leaves the church at the end of the service. We are the designated clean up crew, and we enjoy it. It's just hauling books and folders to the closet, and neatening the place up. (The gays are good at that sort of thing.) But then everyone had decided to bring a glass of water and take one tiny sip out of it, so there were all these glasses to empty and get rid of. And the folders looked like there had been a sudden evacuation. Papers and books everywhere. And the line to get out of the church was a mile long. And I was wearing my nylon robe, which I couldn't take off because I was only wearing an undershirt (not a wife beater, a regulation T-shirt). Fortunately, Alastair keeps me in good humor. And Fred was there, so we could just stand and chat. Then after leaving the church, which was a fight because there were hundreds of tourists streaming in who wanted to see the inside of the church, the Center was crowded with more tourists.

Easter has never been one of my favorite holidays. Of course the meaning is important and the music is nice, but it's just not a holiday that turns my crank the way a holiday like Thanksgiving does. If you sat me down and said, "Relax...relax...okay...childhood Easter. Quick. Give me an image." It would be a half-eaten stale candy egg. One of those with a white sugary center and about a quarter inch of colored sugar all the way around. Those were so gross. There was nothing to them but sugar. Not even taste, really. Later on, we got M&Ms, which was nice of my mother. But still, I just think of stiff new clothes and a big dinner that didn't mean anything to me.

After standing and chopping and not being a very good conversationalist with Fred during our preparation for tonight's dinner, I was wound up like a towel you're trying to wring the water out of. That was me. Then the guests arrived and I said, "We could sit on the terrace!" We'd thought of that earlier, but we thought the weather was going to be bad. Once the terrace door was open, I was fine. It turned out to be a great evening.

The strawberry risotto was well received, although one woman announced that she doesn't like rice. (Rice? Seriously? So the trip you're planning to Thailand...never mind.) The Beef Stroganoff went over well, as did the asparagus and potatoes. (Fred expressed surprise that the potatoes went over so well. I said, "They're Dutch. Of course they liked the potatoes.") And Fred's cheesecake with a blueberry sauce (Guess who doesn't like blueberries either) was a wonderful end to the evening.

And once again, we're leaving the mess for the morning because it's late.
Posted by Andy Baker at 11:50 PM

Well, now I know what a wife beater is...

I like the sound of strawberry risotto - is it sweet or savoury?

Savory. You start the whole thing with onions and garlic and there's chicken stock. But strawberries give off a lot of water and it messed up my timing.

Strawberry Risotto... never heard of that but wow I want to try it.