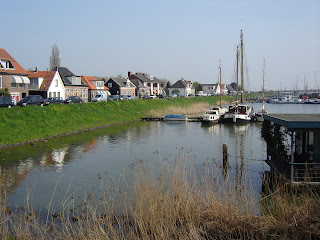 Fred and I took full advantage of Second Easter Day. We slept late, slowly cleaned up the kitchen after last night's dinner, and took a bike ride to North Amsterdam. Nothing pressing the whole day.

At one point, we were riding down a particular street that I thought looked really familiar. Fred said that he hadn't been there before, and I thought, Well, if he hasn't been here, how would I have been here? A lot of those little streets look ridiculously cute in the same way, so it's possible that I'd been down another ridiculously cute street that was similar to that one and I was getting them confused.

Then we rounded a corner and I said, "I've been here. I walked into that place looking for a sandwich and I ended up going in that snack shop and getting a berenhap with sate sauce and then caught a bus." Turns out I did a bunch of intakes at a company in North Amsterdam last autumn.

We spent most of our time today in North Amsterdam in Nieuwendam and Schellingwoude, which Fred deemed just like Volendam...but better. "So don't tell anyone," he said. "Keep it a secret."

On my first trip to Holland, we went to Volendam, which I knew even then was a city that had sold its soul to the tourism devil. Someone took a cute little village and then put up every little cheesy fast food and souvenir shop that will fit and then bussed tourists in to create the Volendam of today. (At least that's my memory of it.) It's sort of a sad place. People looking for a cute little village to walk around should save their film and tourist dollars and just spend some time in Nieuwendam or Schellingwoude. There are not as many souvenir shops (zero), but you can definitely find a place to sit in the sun and have enjoy the beverage of your choice. And it's totally what tourist look for.

Fred took some nice snaps while we were riding around today. 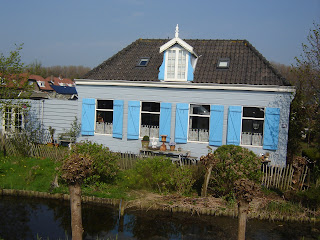 This is a cute little house we rode by. Surrounded by a canal. There was a lot of that going on. It's like some houses had moats. 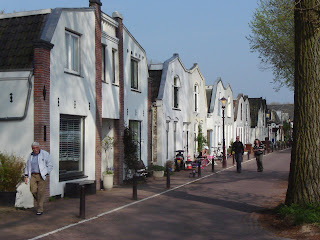 There were a lot of streets like this. Rows of houses with a little road and a harbor across the street. It was like a postcard - see the top picture. 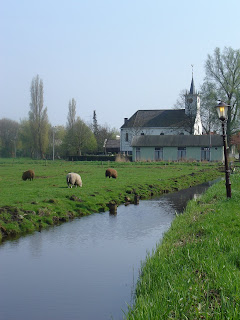 We also passed a field with sheep...three sheep. They were covered in thick, nasty wool. It was such a nice scene to come across. Very quiet, very country. 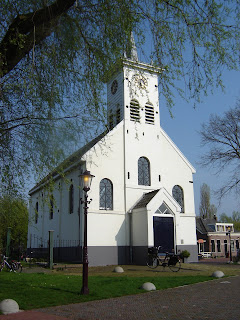 And we occasionally rode down a little street that led to a little culdesac with houses and sometimes a little church like this one. It was a very nice day. Did you notice how three of these pictures are landscapes with veering off to the right. Maybe that's Fred's style.

We took the ferry back, which was quick, easy and free. I'd never done it before. Such a nice day - and tomorrow I get my teeth cleaned at 8:30 and I have a class. Back to real life.
Posted by Andy Baker at 7:15 PM

Feeling seriously homesick now.
As for your previous post: I have several Dutch colleagues who have all lived in the UK for years. Most of them still eat potatoes every day. That is one Dutch characteristic I have managed to shed!

If you'd cycled a little further you'd have got to my house!
I reaaly think this area of Holland - Waterland - is a very beautiful part of the world and we are very lucky to have found it!
As to Volendam, its touristy, sure, but if you run out of bread on a sunday you know you can pop along in the car and get some. Its the only sunday shopping place around!