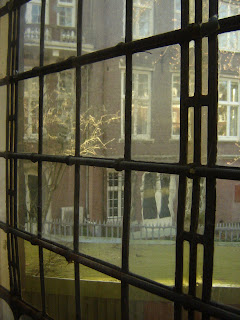 I spent about five hours today having mondeling (oral) exams with my students. I spoke with each of them for about 7-10 minutes - one after the other. It was a very interesting, if sort of exhausting day. Most of my students speak much better (and certainly more candidly) individually than they do in class. (With a few, it was like a short counseling session.) Some expressed to me that speaking in front of their peers makes them nervous. I never had that problem in Dutch class. I was sort of a loud mouth who always had the answer - especially to grammar questions.

Speaking of which, I realized today that I'm going to have to work grammar in more creatively next year. I know I lose a lot of them when we're looking at grammar - and some of them are still totally lost even though I feel like we've beaten the subject to death. It's sort of a pity that I've gotten to the end of the year and now I get it - but that's how I am. I've done fine this year, but only after having gone through the entire year do I really have a sense of these students and of the year as a whole. I'll do better next year.

Grading in Dutch culture is different than it is where I come from. I noticed this when I was grading kids a couple of years ago when I was teaching high school. And I felt it when I was being graded by (adult) students at the language school where I teach.

Some of my students go on and on about how much they enjoyed the class and how much they learned. But when they are faced with scoring the experience on a scale of one to ten, Dutch students consistently give an 8 if they really got a lot out of the class. A ten is reserved for absolutely perfect and a nine is reserved for almost perfect. An eight means that the class was really great. I still get eights and I think, "Really? I thought you liked the class."

An eight to me is like a B. A nine feels like an A and a 10 is like an A+. Honor students in my high school could get even higher than an A+. (Generally, honor students were kept away from the likes of me, but I wooed one with my youthful humor and good looks, and learned their secret ways.) I'm willing to concede that maybe I didn't merit an A+, but I feel like an A wouldn't be out of the question in most cases. An eight still feels a little bit like a slap in the face with some of my students.

Similarly, when I was grading students in the high school, I had to be really tough, picking at flow and pronunciation and every little grammar slip. And these are kids who many native speakers (especially Americans) would speak to and be completely impressed with in terms of their ability.

So I start with an eight when I'm grading these kids. No one gets a ten and few people get a nine. I have kids who are satisfied with a six! I had a girl tell me today that her 5.5 was really a six, so she was fine with it. I said, "It's not a six. It's a 5.5. You were a tenth of a point from failing and having to take the test over." I should have failed her. Next time I will.

The whole experience is an exercise in bending my brain (figuratively) to how the Dutch think. It feels like the slap in the face that some of them to give them an eight. But they understand it. And similarly, if I give some of them a six - like they deserve - they'll get it and be okay with it.

I have to do more reading on the Dutch educational system. It's fascinating. Structurally, it's pretty different than the US system. (And I don't like some of it.)

There is a "6 culture" in the NL. It seems they study a minimum in order to get six. Oh yeah, Dutch people are egoistic with grading things. Even if they are very satisfied with something they say: "It was not bad", or simply: "Goed ". They also do NOT loooove things. They think it is "leuk", nice, ok. They refrain themselves of getting too enthousiastic and finding things "awesome" "fantastic" or "mind-blowing". They do not use "wooohoo !" or "wow !'. Remember about the Dutch logic: clogic. It is very important to understand their minds and souls in order to adapt to things here.