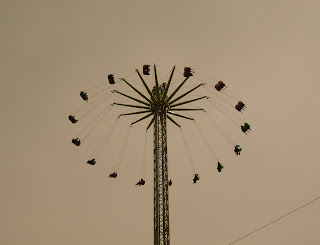 I recently got an email from someone and I went and looked at her blog. While I was looking at it, I realized that the look of my blog really needs an update. It feels like a house that was decorated when I moved in four years ago, but now it's a little stale. There all kinds of different options now. When I started blogging, back in 2004, I chose a bunch of the options that Blogger offered, and I've lived with them since. I've made a few modifications, but it's basically the same as it was originally. I need to mix things up a bit.

My opinions on the look of people's blogs can be severe, but I'm pretty forgiving. The main things is don't like are...for instance music - the kind that starts playing when you go to the page. I'll avoid blogs when there's music. It's so suddenly in my face. I hate it. I like to see YouTube videos when I go to blogs, but I've never done them and I don't expect I will. I'm more of a linker for things like that.

For my blog, I like a straight forward set up. Classic, understate. I like to be able to see the words and I prefer black type on white background - but white type on black background it my least favorite. That said, the blog that made me re-think my set up was white on black. My blog feels like something that used to be crisp, but it's yellowed a bit - like a favorite table cloth.

I wish there were more options in terms of Blogger templates that I like or modifying this template. I feel like I need to strip it down and start over completely - take all the furniture out of the room and start over. I've had people say, "Move to Wordpress," but I'm not going to move. It's too complicated. I just want a different look and I think I can get it with Blogger. For instance, I think I'd like tabs at the top. I've seen things I like on other Blogger blogs. I just need to figure out what I want. I have to do a lot of window shopping.

You know what else I don't like? It's Google Ads. I know people have them, but I don't think they're worth it. They sort of have a look like a house that has a card table out front and a sign that says, "Apples - Twelve for a dollar." It's like people who check every payphone for a quarter someone forgot. It seems sort of low rent. I've heard you don't really make much off those. It's not worth it to me. (By the way, I would love to hear success stories if I'm wrong.)

The label cloud is something that I like. I'm going to have to try a few things. I also told myself that I was going to put up my "Followers" when I had ten and I just got to ten.

So I've got a lot of reading ahead of me. I hope I didn't offend anyone. Am I wrong?
Posted by Andy Baker at 11:03 PM

I really like your blog the way it is. Clear, simple, uncluttered. We came to pick up the pearls of wisdom that drop from your keyboard, and that's what we get! (could that be any more grovelling?)

I will not monetize my blog but I do understand those who do that. I have very weak eyes (-8) so I do not like white on black background either. I would like to insert some "special effects' in my blog, especially with "labels" exactly as I've seen in "Elf in Amsterdam". Maybe I should ask him how to do that ? Definitely I will change the logo after summer. Andy, I think you should have a box with "followers".

I know what you mean...each time I look at my blog, I think of changing the look. But when I go to play with other formats, they don't look right to me...guess I'm too used to what I have and blogger doesn't have many options.