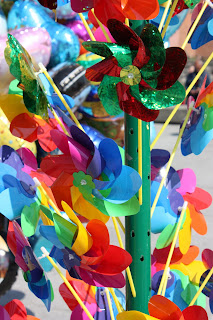 1. I did a lot of paperwork today. Administrative stuff that it took me a while to get my head around. I had to do it in little steps. It was very put-one-foot-in-front-of-the-other kind of stuff. I finally got it done and it was a huge load off my back. And then the other little things that I have to do - as follow up - don't seem like such a big deal.

2. A baby hat I've been designing is finally finished. I've written it down and I need to get someone to test the pattern. It's a simple pattern, but it's exactly what I wanted. I was going back and forth about how to end it, but I picked something and I'm happy about it. I think I'll expand it - as someone suggested - to an adult size. I really like it.

3. A headline I read said that the governor of Maine just signed a law legalizing same sex marriage - if you hadn't heard. I love that this keeps happening in these random states with no warning. It's just one after the other. It's such a nice surprise with all the other crappy news that we keep hearing lately. It makes me hopeful that more people will realize that opposition to same sex marriage is stupid. Maybe I'm tired, but I'll go ahead and say it: If you're still opposed to the idea of same sex marriage, you're being a prick and you need to get over it. It's nothing but prejudice and that's ugly. Don't be ugly.

4. It occurred to me that I didn't give an update on my friend, Patty - after requesting good thoughts and prayers. That reminds me of a person in my life who is always telling the first half or the last half of a story - leaving me hanging or bringing me in halfway through a story. That drives me crazy, so I should close the book on the Patty story. She had surgery and is recovering. She's doing fine. It was something that needed to be done, but there were no complications and she's feeling better. All good thoughts were appreciated.

5. Fred and I just watched The Celluloid Closet. It's really good. If you haven't seen it, you should. It's an eye opener. It's about gay people in film throughout history. We also watched The Times of Harvey Milk recently, as well as Beefcake. The Harvey Milk film is an inspiring piece of history and is about an amazing man. Beefcake is just eye candy. I bought all three at a local bookshop. Money well spent.
Posted by Andy Baker at 10:10 PM

For those of us here in Maine, it was anything but random. It's taken literally decades of activism to get to this point, and we'll still likely have to deal with a repeal referendum, which the haters are apparently already collecting signatures for before their petition has been approved by the state (not legal). If the referendum goes through, it just means a step back to the drawing board, but all of New England will have same-sex marriage soon enough.

Still looking for someone to test your pattern? (Note #2) I'd be happy to volunteer...
-christina

Christina, Would you be a lamb and send me an email? There's a link in my profile. Thanks.