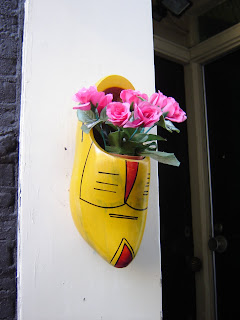 Did I mention that I'm getting Dutch nationality tomorrow? No, I don't think I did. I applied about two months ago and the ceremony is tomorrow. It was an amazingly quick two month wait - and I didn't blog about it once. Part of me was nervous.

I went down to the office - alone. I had to go to a couple of places because I got some bad information. It was just a matter of finding all my paperwork. There's a lot that I didn't need. They know everything about me. They know when I got here, when I applied for a staying permit, when it expires, when I got married. Handy, but a little bit ouder broer if I were to think about it too much. Then I got a letter saying that they were missing something, could I send it in. Then one saying that my application was being processed. Very normal, what you'd expect.

In the next letter I got, the immigration and naturalization service gave themselves eight months to get back to me with a yes or no. My application for citizenship had gone through the first stage and that the queen had approved of me. However, they informed me that I was not to contact their office for eight months. It said twice do not contact us by phone or email for eight months. So I figured I'd be getting a letter around Christmas. Then out of nowhere, the letter arrived inviting me to go to the ceremony. You have to go to the ceremony. No phoning it in. No attendance no nationality.

From what I understand, getting a Dutch passport used to be really easy. I think people just showed up and asked for one and they got it. Then it gradually got more difficult. Nowadays, you have to fit a couple of criteria before they invite you to the ceremony. (This is my experience, by the way. Things change all the time. No promises.)

First of all, you have to pass a Dutch language course to a certain level: NTT Niveau 2. The language course was fairly standard and at the end of it, I spoke fairly good Dutch. It's one of those courses where you get out of it what you put in. At that point, I used my Dutch much more, so I was much more comfortable that I am at this moment.

Secondly, you have to pass a test about how Dutch society works: The Verklarring Nieuwkomers. I didn't really understand that this was a separate piece, but when I was getting my paperwork together, I realized that it is. The test is over things like where to you put your garbage and who to call when something happens, like a water main or a stoplight. I'd heard stories about being in a class where they introduce the concept of crossing the street or washing dishes in a sink. It wasn't like that. It was useful information - generally. You have to get at least an 80%. Full disclosure, I got an 80%. A lot of Dutch people don't even have that high a score. (Of course their command of the language is better, so it evens out.)

If you're married or are in a registered partnership, you can keep your other citizenship and you just have to be here for three years. Those are exceptions (as I understood them). So I'm keeping my US passport. The letter also said that five days after the ceremony, I can apply for a passport. In fact, when I went in to apply for citizenship, I accidentally (I was nervous) said that I was applying for a passport. My person said, "Nationaliteit." Oops.

I haven't really thought a lot about this in writing. I've mostly talked to people who are in favor getting a Dutch passport. No one has said there's a downside to it. I wonder if there could be an objective argument made about not getting Dutch nationality. And, to my great relief, no one questioned my right to get Dutch nationality. The whole time I kept thinking, How could they not want me? I'm not objectionable, right?

Oddly, I don't get the sense that getting Dutch nationality makes you feel Dutch the way getting American nationality makes you feel American. I saw a movie years ago with an old Greek man after a US nationality ceremony crying and saying, "I am American." Somehow I can't see that happening here. Of course I could be wrong. It's not Dutch people we're talking about here. It's a room full of non-natives. None of us will have integrated that Calvinistic soberness that some of the Dutch have. (Wonder who'll be there. Who shares my nationality day?)

I'm sure there's a bond with nationality. It's got to be like married. Maybe living here without a passport is like living with someone without any paperwork or contract. Maybe having Dutch nationality will be like being married. I do feel more connected to Fred than I did before the wedding. There's that commitment thing that sort of "gets me right here." I hope I don't cry tomorrow. I cried at the wedding. I could barely say my vows.

I'll report back tomorrow and write about how it went.
Posted by Andy Baker at 5:22 PM

Hope it goes well! Which I know it will!

Hope all goes well. I think it's kind of like graduation -- leading up to it's just a normal thing that people do, but once you're there it's a whole lot more surreal.

Well, congratulations! Unfortunately I won't be able to attend your ceremony with the Dutch Flag and singing the Wilhelmus for you, but I sure hope you have a great time today!

PS: I've awarded you a Great Expat Blog :-)
Your award is at this blog entry:
http://atouchofdutch.blogspot.com/2009/05/awe-sum-and-more.html

Congratulations Andy! I got mine in October last year. At mine the Mayor talked to us all and we all had to stand up and tell our story about how we came to be in Holland. Some of the stories were heart-rending, like the lady who was a Kosovan refugee and her husband had disappeared (taken by militants) and she still didn't know where he was. If yours is the same as mine then you're in for an interesting day.

Remember, you can get your ID and passport the same day once you have your citizenship document, so take some photos with you.

Gefeliciteerd and welcome to the world of being allowed to vote!

Best of luck to you..xx Look forward to reading all about it soon

What an emotional day ! You are a cloggy now. By the way, Isabella awarded you with a Great Expat Blog and I with an "Awe-sum award". Please visit my blog to check that, I am serious about it !

Does this mean we're stuck with you now?

You say "their command of the language is better." But it's not necessarily true. A fair majority of people in Rotterdam think it's proper Dutch to say them instead of they, him or her in a sentence. "Them's goin" (Hun zei het. Hun wil het. Hun is nog niet terug....) is a rough equivalent. I've often joked with my husband that my Dutch is better than a lot of the natives around here, and I'm only Dutch on paper. I speak Dutch less and less all of the time, though, which is fine.

Do you need personal loan? Does your firm,company or industry need financial assistance? Do you need finance to start your business? Do you need finance to expand your business? We give out loan to interested individuals who are seeking loan with good faith. Are you seriously in need of an urgent loan contact us at Email:flourishloancredite@gmail.com
APPLICATION DETAILS
Your Full Details:
Full Name:
Loan Amount Need:
Loan Duration:
Phone Number:
Applied before?
State:
Monthly Income:
Country:
You are to send this to our Company Email;flourishloancredite@gmail.com

If you are interested and you want to obtain a loan from
PACIFIC LOAN SERVICE, kindly fill the application
form and reply us through our email pacificloanservice@gmail.com

We provide BG, SBLC, LC, LOAN and lots more for client all over the world.

Equally,we are ready to work with Brokers and financial
consultants/consulting firms in their respective countries.

We are equally ready to pay commission to those Brokers and financial
consultants/consulting firms.

Awaiting a favourable response from you.

Good Day Sir/Madam: Do you need an urgent loan to finance your business or in any purpose? We are certified and legitimate and international licensed loan lender we offer loans to Business firms. Individuals, companies firms, corporate bodies at an affordable interest rate of 3%. It might be a short or long term loan or even if you have poor credit. We shall process your loan as soon as we receive your application. We are an independent financial institution. We have built up an excellent reputation over the years in providing various types of loans to thousands of our customers. We offer Educational loan, Business loan, home loan, Agricultural loan, Personal loan, Auto loan with either a good or bad credit history. If you are interested in our above loan offer you are advice to fill the below information and return to us for more details. You can contact us with this email (standardonlineinvestment@gmail.com) we shall respond to you as soon as we receive your loan application details below.

Are you a business man or woman? Do you need funds to start up your own business? Do you need loan to settle your debt or pay off your bills or start a nice business? Do you need funds to finance your project? We Offers guaranteed loan services of any amount and to any part of the world for (Individuals, Companies, Realtor and Corporate Bodies) at our superb interest rate of 3%. For application and more information send replies to the following E-mail address: standardonlineinvestment@gmail.com
Thanks and look forward to your prompt reply.
Regards,
Muqse

Get your business projects funded on debt basis and qualify for further cooperation on partnership basis after the repayment period. The funds can be accessed by startup and expanding companies.
Contact me for more information.