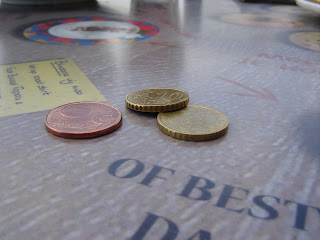 The Dutch are not big tippers. This will be no surprise to anyone who lives here, but it still shocks me how little will get a slight nod of appreciation. The picture above has twenty-five cents in it. That's acceptable. In NYC that would get you chased down the street. (I had a friend who claims to have once chased someone down the street waving his one dollar tip saying, "Did I do something wrong?")

I was a waiter in Manhattan for about five years. A couple of years exclusively, one year while going to graduate school and one year to supplement my "real job" and because it was easy money two nights a week. See how I still have to justify it a bit? Normally, I talk about my waiter experience like I'm talking about having been in the armed services. But then I think about just waiting tables and just living my life and I have to shorten that time served in some way.

After about six months of waiting tables, I happened to be talking to a guy in his forties who was a "cater waiter" - slightly different than a regular waiter. I was in my mid-twenties. He said, "At some point, you'll want to be able to do something that not everyone can do. Now, not everyone can wait tables, but almost everyone thinks they can." That moved me towards finding the way out of the waitering business. (Okay, do the math. I didn't do it immediately, but it was always on my mind.)

I believe that part of the reason waiters here don't get tipped is because the service generally sucks. And I believe that the reason that the service generally sucks is that waiters don't get tipped. It's a circular thing. If waiters depended on tips, they would give much better service. But they get a salary here and tips are just an extra bit of money in their pocket. It doesn't represent the rent, the phone bill and the student loan payment.

I've had waiters stand three feet from me and look right over my head before they head back to the kitchen to emerge whenever they feel like it. That's not the way it's supposed to be done. You're supposed to look at every table and see if the customers need anything. Are they trying to catch your eye? Are they all sitting with empty glasses? And waiters shouldn't roll their eyes when the customer wants something. Or take one drink order from a full table and walk away.

One of the first times Fred and I went out, I left a NYC tip on the table. He said, "Don't leave that much! They'll start expecting it." He's all for keeping the tipping down and putting up with crap service. The Dutch - as a people - have a lot of strengths. Service is not one of them.
Posted by Andy Baker at 5:07 PM

Tips are quite common and expected in Austria. However, I generally found the people working in service in NL friendlier and more attentive than here (especially Vienna). Imagine! Some stereotypes just seem to be really true (at large,of course). The Dutch and their relationship with money could be one of them. ;-)
Doris

Personally, I'm of the 10% tip school, 5% for service and 5% for quality of food, if you only get drinks, 10% for the lot, less for less service. (This was how I was taught by my grandfather, but other Dutchies think I tip too much)
When I was in the States, I would adjust to the habits of my friends *if* they would let me pay for anything ;-)

In general, Dutch people are pretty cheap though.
There is a joke about a Scottish recipe for omelet, it is supposed to begin with "One borrows two eggs", I guess the same could go for Dutch people.
(Actually, a Belgian joke about Dutch people is "How was copper wire invented? ... Two Dutch people were fighting over a 'stuiver'" (5 guilder cent piece) )

About the service, I think it also helps that in the States, when you complain about a waiter, they're at risk of getting fired. In the Netherlands, if you have a complaint, the manager will laugh in your face.
Here, every employee is protected by law and it's so hard to find people who will actually show up for their waiting job that firing someone for crappy service is just not worth it if it's not costing you more service than a complete lack of personnel.

I'm feeling a bit out-of-body after reading your post; maybe Humboldt County, CA is a little Dutch enclave, because the service her is abysmal. I've always attributed it to the dearth of decent restaurants; people put up with crap service because there are so few alternatives. Le sigh.

Whomever taught you that not everyone can be a waiter (waitress, server - whatever) was so right; I tried it in my 20s when living in Santa Barbara, CA, and it kicked my ass.

in the netherlands, 15% tip is already included in the price, so tipping 10% is considered good.

In Amsterdam its more common to round the price up: if something is 8 euros you make it 10 but if its 9, 50 you still make it 10 so there is no percentage just make it easy

Do you need a Loan?
Are you looking for Finance?
Are you looking for a Loan to enlarge your business?
I think you have come to the right place.
We offer Loans atlow interest rate.
Interested people should please contact us on
For immediate response to your application, Kindly
reply to this emails below only:
mohamendloanservice@gmail.com