The Mysteries of the Scots 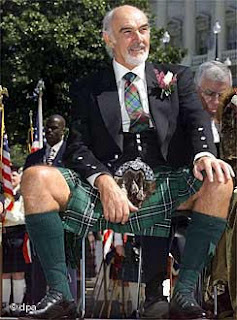 Note: I did not take this photo
This afternoon, Fred and I went to the Center while during our Saturday errand running. The Center of Amsterdam was filled with men in kilts today. There were certainly a couple of women, but it was mostly men - and mostly loud and (possibly) tipsy. There were all different color combination on the tartans, an amazing variety. Oddly, most tartans seem to tend to be (see how I'm hedging myself here) from where I was standing heavy on the dark blues and greens with a little red or yellow stripe thrown in here and there. There were a few red kilts, and I saw a light blue based kilt and also a beige based one, but it was mostly the darker colors.

When we stopped for some patat, we stood and watched guys walking back and forth on the street and we came up with two questions. Our first question was about the length of the kilt. There was a slight variety in length. It seems like most of them were about knee length. Shorter than that just looks like skirt, and longer looks like it doesn't fit properly and it's slipping down. The longer kilt were generally on younger guys, making us think that they'd just borrowed their father's kilt for their trip to Amsterdam.

Our second question (that we really didn't have any means of getting answered, it was just one of those times when you throw out a question and discuss), was whether or not the ten thousand Scots that are supposed to be in Amsterdam this weekend are wearing the proper undergarments.

Yesterday, we both wore coats and scarves (and pants). Additionally, I wore a hat and for some of the time I was wearing gloves. These guys had bare legs and way less on top, a lot of times it was just a shirt or sweater and sometimes it was a T-shirt. I can see wearing a wool kilt on a day like today. It's wool and there's a lot of material in them. However, it was a little chilly. Is it possible that everyone was going commando, or is that only a spring and summer sport?

When we paid (€,30) to use the restroom, and (as a bonus) I got the question answered. A guy entered the room in a rush - after what I am guessing was several beers. I didn't see anything, but it just seemed like the timing of his arrival at his destination and the start of his project included a pause and a snap. It didn't seem like all of the equipment needed for said project was readily available behind a wall of fabric. Then it happened two more times with two other men in kilts.

Granted, that was not a scientific study and my findings cannot be generalized to all of the other men in kilts in the city. I'm just saying what I saw. It's just that logic would dictate that if there's the possibility of a cold draft shooting up your kilt all day...well, a pair of briefs never killed anyone.

So why was Amsterdam invaded by men in kilts today? Something about football.

"whether or not the ten thousand Scots ... are wearing the proper undergarments"

Depends how you define 'proper' I suppose...

I think for the Scottish football supporters the phrase 'it's just about the taking part' is very apt. We'ed all pass out with shock if we actually won something.lol.
On tour perhaps the undergarments are to protect non-scots from getting an eyeful on a windy day. If a Scot were to wear boxers under a kilt on home territory they would be named and shamed for not being a 'real man'(whatever that is!)

I have photographic evidence (and a burned memory)that they do not wear anything under their kilts. All I had to do was ask them the question at the Euro bar and it was a chain reaction of "here, i'll show you!"