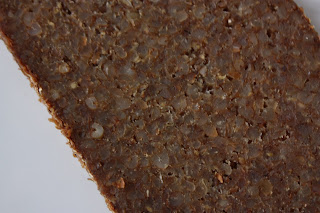 Fred brought some of this bread home on Friday and we've been going through it. It's called roggebrood - literally 'rye bread.' But it's not something you'd get in NYC with pastrami and a spicy mustard. This variety made of rye, water, salt and some enzymes - and you can tell. It looks big in the picture, but a slice is really only about four inches by two inches, and it's sliced really thin. My first experience with it was when we served (homemade) split pea soup at a dinner party and we served some of this with very old cheese to accompany the soup. The old cheese was so old that it was the texture of Parmesan, but it was definitely a yellow cheese. It's good, and as Fred says, "It has a lot of taste." 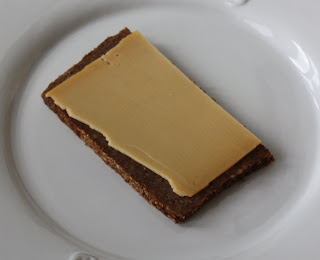 This is the one I ate today. Just the one slice of bread and the cheese. No condiments. Have you ever seen South Park? Eric made funny of Kenny one time because Kenny's family is so poor that he doesn't even have condiments on his sandwich. Maybe Kenny isn't poor. Maybe he's just Dutch. [Fill in your own punchline here.]

When I think of open faced sandwiches, I always think of teachers I had in elementary school. They seemed so old and persnickety only wanting one slice of bread (and in most cases it was just the crappy white bread from Texas in the early Seventies). I'm probably as old now (or I'm nearing it) as they were back then. And here I am eating an open faced sandwich on a gray Sunday afternoon - so maybe I'm persnickety too. 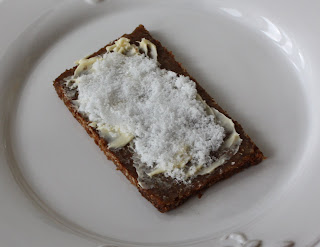 Fred's choice of sandwich today was margarine and sugar. I used to like a butter and sugar sandwich on white bread. I couldn't eat one now. Those were the days before my mother switched us to wholewheat. It had a thin layer of butter (I'm quite sure we didn't use margarine) and as much sugar as I could sneak on to it. I can still remember the crunch of the sugar between my teeth. Did I mention that my father was a dentist?

This is the kind of food item you don't come across if you just live here. You sort of have to live with a Dutch person to just happen to have these things in the house when you're looking for a snack. You would totally pass this stuff by in the grocery store, or look at it and wonder what you would use it for.

Fred's good for that. He brings some some random stuff occasionally. When I was very first here, I opened the refrigerator and took out some cold cuts. I looked at it and tried to puzzle out what gerookte paardenvlees meant. Then I walked into the next room and asked, "Is this seriously smoked horse meat?"

As I recall, open-faced sandwiches were a big thing in the 70's. I believe it was primarily a diet fad thing - have a sandwich, but with half the bread!

How come the sugar looks all ...spider-webby?

Maybe it's the margarine. No spiderwebs were harmed in the making of that sugary mess.

Peasoup (or erwtensoep, or snert) is traditionally served with roggebrood with 'katenspek', which is a little like smoked bacon. Yum. I must say, I can't imagine eating it with sugar... but then I have a (Dutch) colleague who swears by eating pindakaas (peanut butter) on a krentebol (currant bun).

I've got a friend from Limburg and she has these with appel stroop (a spread made from concentrated apples) and cheese, bless her!

The fact that Fred made this sandwich, AND that he's made 5 attempts at a meringue, has made me fall in love with him all over again.