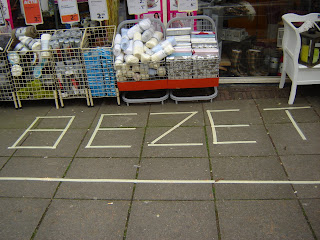 Tomorrow is Queen's Day and the sidewalks are being marked up. People are using chalk and different kinds of tape to mark their spots. I have heard that in a parallel universe where the world is ruled by dogs, the Dutch dogs just pee on their spot and they don't get all the visual mess of the writing that we have here.

There are a variety of ways that people mark their spot. 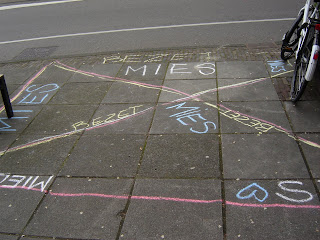 My favorite is chalk. Last year, some kids chalked up the front of the building every day for a week and the super of the our building washed it down every morning. I think it's the least offensive. But the little bit of rain we've had recently has caused problems for people who use chalk. Pity. 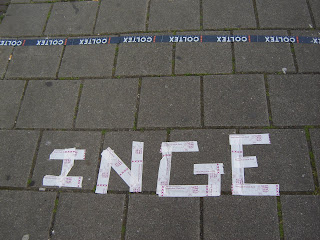 Another option is tape. On Sunday we saw some people out front writing their names in tape. Unfortunately for them, it was packing tape. They spent a while putting it down, but I thought it was a little early, so I ripped it up. They came back yesterday and put their names back using duct tape this time. I left it alone. Sunday was just too early. It was offensive. 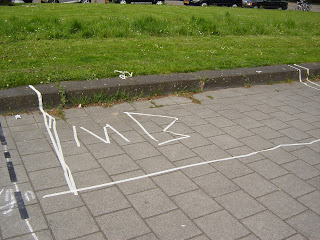 Apparently someone had already started the party. 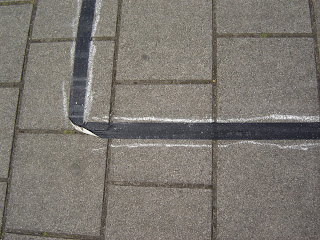 My favorite is the combination. I just saw it this year. I could rip up this tape, but it's still there. I like that. Think ahead. They're prepared for the super of the building or me. 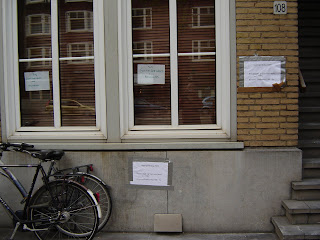 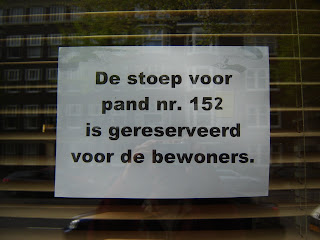 Another thing I notice this year - but has probably been going on for years - is the sign. All along the street there are civilized signs. This one says "The area in front of 152 is reserved for the residents." Bezet, by the way, means "Occupied." 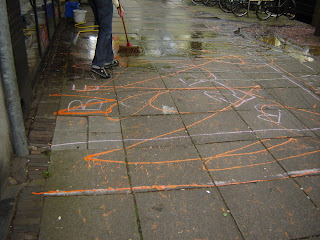 The worst thing I saw today on my walk was where someone had squirted some kind of paint or ink on the sidewalk in an effort to mark their spot. It was in front of the wine store. The guy was out there scrubbing it down with a straw broom and lots of soap and water. I can't imagine how angry I would be. I went by later and it was cleaned up. I hate seeing paint on a sidewalk - where there's been a spill or something - it just creeps me out.

I've decided that two days before is enough to mark your spot. We weren't here for Queen's Day last year, but it seems to me that the lead up to it is less than it was in previous years.

Fred says that every time he sees an adult marking a spot it makes him look at them differently. He sees it as a very "kid" thing to do. Of course he doesn't like anything second hand and can't imagine why anyone would. He's like that. I always bring something home when we go out on Queen's Day. I'm like that.
Posted by Andy Baker at 7:52 PM

In theory, it's illegal to use tape to mark your space and you can be fined (I think) €80.

Of course, it doesn't actually happen, so folk carry on using tape which is still there 6 months later. Well done for ripping it up!

I wonder how effective it is though. I mean, if you mark your space then don't turn up until 10:00, is your space still free?

Andy, what a great blog entry about this! Very interesting :-) Thanks for sharing! I got your link to this via Anita's Greetings From Holland blog.

Andy, I think like Alastair said above: it is illegal. But the authorites "close an eye" to it (gedogen beleid). Very good post. I am so lazy that I just told my million readers to visit your site and Isabella's (A Touch of Dutch) if they wanted to know something about Queen's Day !

I just found your blog via Anita's. It's great to read about another North American's experiences here in Amsterdam. All week I kept seeing these Bezet markings on the street, and had no idea what they were, thanks for sharing this! I love how you ripped one of them off, some people are just too eager to mark their spots!