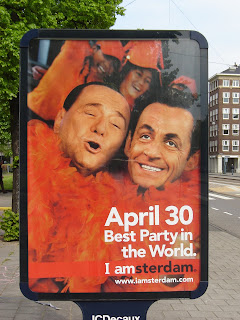 I amsterdam is the marketing campaign that does the whole tourist promotion thing for Amsterdam. It's very I heart NY, but sort of a bad rip off. I don't hate it. I like it in a way. It's memorable and the logo is nice to see. I don't know a lot about it except that it seems like a cute idea that people aren't really buying into. There's a whole article about the campaign on Expatica.

Anyway, they've been promoting Queen's Day with posters like the one above. I recognized the guy on the right. That's the French president - Nicolas Sarkozy. I knew the face of the other guy, but it turns out he's the Italian Prime Minister, Silvio Berlusconi.

There are other posters around that I haven't seen. There's one of Barack Obama and Russian Prime Minister, Vladimir Putin holding hands and wearing "Kiss Me I'm Drunk" T-shirts. 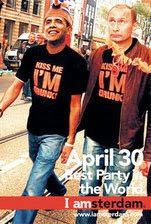 And there's one featuring Hillary Clinton. 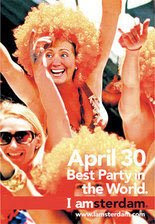 I heard the one of Hilary Clinton was photoshopped. And the Obama one was removed from the campaign.

While the campaign is cute, I don't know who in the world it's aimed at. It's not the people who live here. People who live here sort of already know about it. And visitors to our fair city who might be here and see the posters...does anyone expect them to stick around or return in hopes of seeing Mr. Sarkozy in a boa?

Maybe they're trying to draw people to Amsterdam from other cities in the Netherlands. I don't know. Maybe these posters are all over the world. I only know.

Queen's Day always makes me think of Sally. She loved Queen's Day. I miss her a lot, but all I have to do is think of seeing her on Queen's Day and it brings a smile to my face. I don't think she'd love the campaign, but she'd think they were cute. Happy Queen's Day!

I had the same questionings as you did. I think the posters are not aimed to a foregin market nor the Dutch public. It is just a trend to use politicians in ads, here in NL or abroad. It is for the fun.

Possibly the ads are aimed at other politicians.