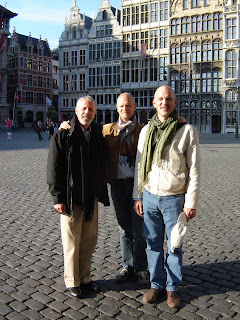 When Butch visited the first time, he and his friends wanted to take a side trip to Belgium. Fred and I discouraged it because they were only here for about a week, and I really feel like there's enough to see in Amsterdam and the surrounding area to keep you busy for a week. So when he was planning this trip, we decided to spend a weekend in Belgium.

Disclaimer: I've often referred to Belgium as the Canada of the Netherlands, meaning that it's okay, but completely missable and not really that interesting. However, I take it back. Belgium has some very interesting bits to it. I've been sort of charmed the last couple of times we've been there. And Canada really is pretty interesting. (There's just a really horrible drive from the border to Toronto - or there was several years ago.) So I take it all back. They are both fine countries.

For our weekend in Belgium, we went to Antwerp. Fred's niece and her husband (and two kids) live there and we've been there a number of times. The first few times we went, there was construction everywhere, which was annoying. Not that's calmed down and it's a very nice city. It's really not the kind of city one sees on one's first trip to Europe, unless it's part of a big package and the bus just happens to be swinging through, but it's a good place for a weekend away if you happen to live here or are looking for a new European city to visit. 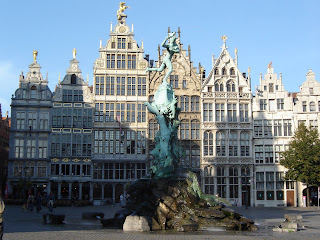 The main square - seen here - is a good example of the feel of the whole city. It's old and it's easily find your way around (especially if you have Fred by your side holding a map). We had the requisite Belgian fries and then ate mussels one night for dinner. And we drank some Belgian beer. The first time Fred and I went down there, we went to a beer bar and had a couple of really good, high octane beers. This time, we just had a couple of normal beers with dinner. 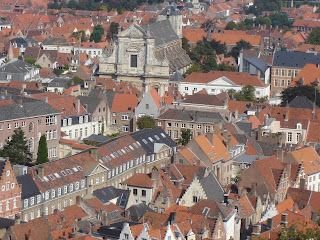 We took a side trip to Brugge (there are several spellings) on Saturday. I had been there six years ago 0n my first trip - we drove through and spent a couple of hours. All I remember is lace. It's an excellent side trip. Brugge is completely cute and set up for tourism. At one point, I turned to Butch and said, "Doesn't it feel like we're walking through a movie set?"

Fred and I went to the top of the big bell tower used in the movie In Bruges. It's sort of annoying because they only have one stairwell for up and down, but people are polite and patient for the most part. (It's a lot of steps.) There's an excellent view from the top. However, as Colin Farrell says in the movie, there's really nothing to do in Brugge. There's lots of cute and it's very easy to take good pictures on a pretty day, but then it's time to go. 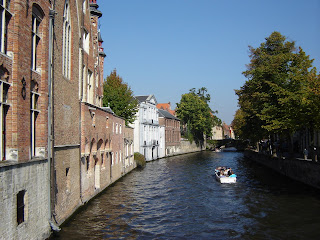 Antwerp has a subway, but it felt like it was built in the Seventies and then left alone with no modernization. It needs some help. It's not dangerous, but it's dank. It's what I imagine communist Russia to have been like. Fortunately, Antwerp is easily walkable.

On Sunday morning - while my choir was singing back here in Amsterdam - we went to the flea market. It's a good flea market - and it closes at about 13:00. Lots to see. Stuff from all over the world. Africa, Asia, and whatever else people pulled out of their basements. Butch bought a couple of things for a total of €5,50, which (to answer his constant question) means $8.02.

It was a very walky weekend. Fred is a walker and Butch and I went along obediently. Then, when we were almost to the hotel, we heard there were "toxic fumes" in the square on which our hotel was located. So along with quite a number of Hasidic Jews trying to get to their synagogue that was around the corner from our hotel, we were delayed and then detoured. We finally arrived home last night at about 18:30.

Antwerp is a nice weekend away from Amsterdam. The trains run regularly and dependably, and they have lots of restaurants and shops. If you've never been, I recommend it - unless you're on your first trip to Europe, and then I'd suggest you wait. 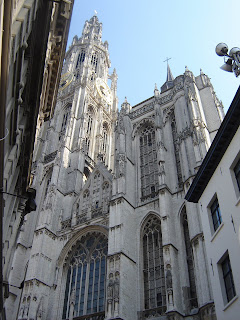 Hmmmm, maybe I'll have to see it on my next trip, then. I've always thought it would be nice to visit Belgium, since it's not big on most tourists' lists.

If a person enjoys art then Antwerp should be near the top of the list; incredible museums, as in Brugge, Gent, and Brussels.