I spent the last three days furiously knitting up a couple of gifts for Fred's niece's baby. Every year I hear about people knitting furiously trying to get gifts for friends or relatives finished. OR I hear them talk about having sworn off last minute knitting of gifts for everyone. Fortunately, I just had the "one" item to do. Fred wanted me to knit a hat for the baby - due in May or something - that she just announced she's "getting" - a Dutch term that sounds like she's going to receive a gift rather than push a baby out of her body. She's got a boyfriend, but I don't know if it was planned.

Dutch kids these days seems to have the schedule a bit off from what I was raised with - and truth be told, what their parents were raised with. But it's a schedule that is quite common here and that I'm sure would not go over very well where I came from. It goes a little something like this: find a boyfriend/girlfriend, move in together, get a child - or two, marry when it feels right. I'm not saying it's wrong. I'm just saying that it's different from how I was told it was done. Weddings? Not so many. Babies? Quite a few. But I digress.

So Mariëlle and Men-sah are going to have a kid and Fred wanted me to make a little hat for him/her. He chose the color and pattern and I bought the yarn and knit it up. (See how well we work together?) He chose a "green" Rowan yarn that was €9,50 a ball. I had him turn the other way while I paid. And I knit the "newborn/preemie" size and came up with this. 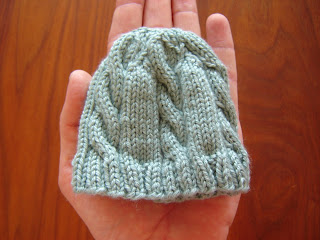 It's tiny. It's like doll's head tiny. So I decided to knit up another in a bigger size and donate this one to a preemie ward somewhere. The thought of ripping it out is not appealing to me at all. And I had to go buy another ball of yarn to finish the bigger one. But it came out looking like this. 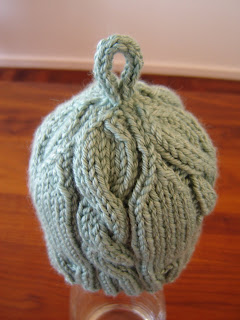 Notice - if you will - the loop on the top. Love the loop. It was my little gift for myself for doing a second one. This second one was done in a couple of hours yesterday. Then I started on this immediately afterwards and I knit on it for a couple of hours after we got home from church last night. I'd been wanting to do one. I like the functionality with the simple design. 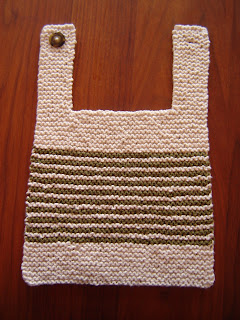 It's a bib. It's from Mason-Dixon Knitting. It's a garter stitch square with two little straps. It's not rocket science, but it was nice to have the pattern so I didn't have to think about how many of this or that to do. The stripes were my idea. I bought this yarn at Downtown Yarns about ten years ago and I've been waiting to use it for something. This was a case of the perfect yarn meeting the perfect pattern. (Although I think the perfect needle size was one size down.) I'm going to send them a sample and ask them if they know what it is. I'm crazy about it. It's really soft and the ball band has been gone - as my dear friend, Schwanna would say.

And that was how I spent my break from my fabulous sweater that I've been knitting. Fred got me the perfect gift - an alarm clock that uses light instead of a horrible screeching sound to wake me in the morning. And I got him the perfect gifts: a new electric toothbrush, an expensive cosmetic product and a copy of Tales of the City by Armistead Maupin, which everyone should read.

So that's done. Now we're off to his sister's house for Christmas dinner with the family. Merry Christmas to all. And to all a good night.
Posted by Andy Baker at 2:09 PM

nice knitting and merry Christmas to you both

Hope you had a wonderful Christmas. Lots of luck for 2009. Louise x