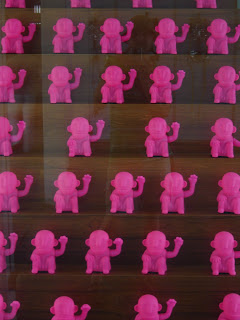 Years ago, my father's wife made the observation that both my father and his sister (my aunt) always had a tune in their head. I remarked that I did too. She (the wife) said that she did not. This led her to theorize that there was some genetic link to the song-in-the-head thing. I may live to regret saying this, but I think she may be on to something. Granted, her sample size was three, and she didn't poll my siblings or his siblings, but it's interesting and I like the idea of it. Like many other things in my life, for years I assumed I was the only one.

My father is a world class whistler. I am a pretty good whistler, but I am more of a singer. And while I think I remember them saying that my father and my aunt hear classical music, I hear more contemporary (well, they used to be contemporary) tunes.

Today in class, something came up and I sang a couple of lines of God Bless the Child in the style of Billie Holiday. And then later, I sang, All My Exes Live in Texas (I can no longer say that, by the way) in the style of George Straight. I have no trouble breaking out in song. And if called upon to sing in front of a bunch of singers (my students), I do it "in the style of" so as to show that I am playing.

That reminds me of the movie Little Voice. It's sort of brutal, but it's pretty good. It's about a couple of trashy British people (Wow, I managed to not say anything snarky!) and centers around the daughter of a trashy woman who has some sort of mental problem, but can sing in the style of lots of different famous singers. Warning: There's "language." They're British. What do you expect? (Doh!)

I don't listen to music much. I like the idea of it, but there's so much talk radio and so many podcasts that I listen to that I don't have the time - or inclination. (And I never listen to the radio.) Plus, there's always something going on in my head. I think I might listen to music if it was the stuff that Brenda Dayne plays. And my friend Patty's sister, Julie (who is my friend too), has good music taste. I just don't have the inclination to pick out music and I wouldn't know where to start.

The kids at school listen to such crap. Two of them put ear plugs in my ear today and had me listen to something they really like. One of them was just some kind of rap thing that was too fast and loud, and the other was a remix of a Patti LaBelle tune - when she was just a girl. Put a house beat underneath a classic and call it "new." (This is the point where I say remark that I feel like I'm getting old. You kids get off my lawn!)

I regularly get the question, "Mr. Baker, what kind of music do you listen to?" I usually report that I listen to podcasts and I explain what they are: talk radio. They are always unimpressed. Then, when pressed, I say that I listen to country music, perpetuating my exotic-ness: the guy they have teaching them English is from Texas.
Posted by Andy Baker at 6:02 PM

Be glad you do not get a taste of what Michael likes these days. He and I are sharing a car at the moment and almost every time I get in the car, there is some hard rock screaming crap CD playing. It reminds me of his dad when he was that age. Good Lord.

I loved 'Little Voice'. I get the song in my head thing from my dad. David, on the other hand, grew up with a father who'd flip out over any noise. Makes for interesting car trips.

I do have great taste in music. Thanks for noticing!

I can totally relate to the song-in-your-head thing..I call it my internal jukebox..it's amazing whats stored in their..utterly random!
I love 'Little Voice' we saw the stage version last year (with Scottish comedy favourite Elaine.C.Smith).
I sing all the time..but very badly.