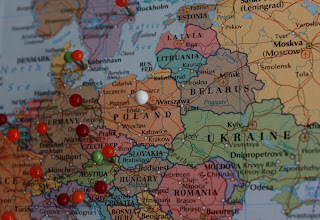 Fred and I have a map to chart our travels. It's color coded. (I love color coding.) I've put a pictures of the map on here before, but here it is again because it's such a nice illustration of where we'll be.

Color coding decoded: orange - Fred alone, green - me alone, red - us together, white - where we want to go. If you were standing in our kitchen, I'd make you figure it out for yourself.

I think I wrote already that Fred put a kibosh on vacations for 2009. But then he found a great deal online (aren't all the great deals found online?) for a weekend in Warsaw. And a weekend away is not an official vacation in The Book of Fred. Similarly, a week on a Greek Island is not a vacation. For it to be a vacation, it has to be something other than a city trip (Warsaw, Berlin, London, etc.) or a week on a beach. Come live in our world. You might not always understand the rules, but you get lots more air miles.

Yes, the site of the Warsaw Ghetto and the Warsaw Ghetto Uprising is now a great destination for a weekend away! The problem is that when I think of Warsaw, I always think of gray pictures and film footage from World War II. I think if falling-down buildings and Nazis and Schindler's List. So when Fred suggested it, I was not impressed, but I've never been there before, so I'm cool with it - as the kids used to say. It sort of reminds me of a conversation I had with my mother. When I told her, two years ago, that we were going to Croatia for vacation, she said, "Is it safe?"

My answer: If overweight Russians in bikinis don't scare you, you'll be fine. Similarly, I'm sure Warsaw will be filled with Eastern European tourists. (Just don't cut in line at the buffet.) I once said, "We never go to Eastern Europe." We do now.

Since the initial announcement/suggestion, I've done a little reading and it sounds like it'll be a very nice weekend. Since the war ended, the city has an extreme make-over - and I love those shows - so you can see how excited I am.

The current student pastor at church is from Poland - by way of Edinburgh. She happens to have a friend visiting from Warsaw (what are the chances?) and she sent me a few suggestions about some places to see. They are as follows:

The Warsaw Rising Museum - About the 1944 uprising and the legacy of the Polish underground
Warsaw Old Town - The historical district
Royal Baths Park - Old gardens and parks
Palace of Culture and Science - A nice view from the top, which I always enjoy

Sounds like a well rounded start to a trip.

We'll find a guidebook somewhere and carry that along. Any suggestions are always nice - feel free to comment or send an email. We do a lot of walking on these trips. Fred loves to walk. (And you should see his shoes. They are not sneakers. They're shoes you'd wear to work. He's nuts.) I like walking enough, but I'm not the walker that he is. I would see far less without him - or take a bus or subway. I'm glad he's there to pull me along. And I'm sure I add something to the experience.

The trip is planned for Queen's Day - April 30. He's already heard that we should have chosen Krakow. When he told me, I said, "Oh please. It's not going anywhere."

So that's something to look forward to: a new pin in the map, a new snow globe and lots of new snaps - and one more country that I can say I've been to.
Posted by Andy Baker at 5:10 PM

My husband just spent three months doing research in Warsaw, and I'd definitely go to the Royal Baths--bring some seeds to feed the red squirrels. And if you stand nice and still, the birds will come eat from your hands, too!