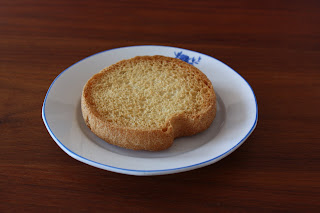 "Mr. Baker," I had a student ask the other day, "What is a beschuit called in English?"

The class then went about describing the dry tasteless biscuit in the photograph above.

"Oh that. I don't know. They might have them, but they're not as common there as they are here."

Does anyone know what they're called?

These little biscuits are a staple in many Dutch households - including ours. They keep for a long time. In fact, I think they arrive stale so that they will keep that much longer. They're also a favorite among my teenager student because they're cheap, filling and have virtually no calories (40 according to the packaging). They're not my favorite thing in the world, but when Fred arrived on the couch the other night with two that looked like this... 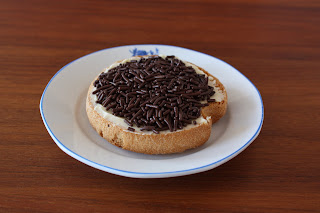 ...I was up and in the kitchen very quickly. (Some people might think that the fact that he had two might mean that one would be for me - and that's usually the case - but I could tell by the way he was holding the plate that it was every man for himself.)

This one has a coat of margarine (which I usually steer clear of) and a healthy layer of hagelslag, which are basically Jimmies. The margarine is there acting as glue to keep the hagelslag (or whatever you want) on the beschuit long enough to get it into your mouth. (And since margarine is about as healthy as glue, that's an apropriate analogy.) As one might imagine, beschuit - being dry as the proverbial toast - are crumbly. You have to eat them with a plate under your chin.

Beschuit are also traditionally eaten with muisjes - little anis seeds coated in sugar - when a baby is born. I took some to Ohio one Thanksgiving after a baby was brought home. The response was pretty much unanimous: "I don't really like licorice that much." Patty likes dry, crunchy things, so that part went over well, but it sort of missed the point. (Also, they don't like marzapan. Who are these people?)

Some people actually eat beschuit with hagelslag for breakfast. It's like eating Fruit Loops without any of the benefit of the milk. It's part of a good breakfast. Of course we ate our share of sugar cereals growing up, but I'm just sayin'.

I think they would be called rusks.

My grandma used them in the crust of her amazing cheesecake and called them zweiback. There are no Germans in my family - this is Chicago we're talking about here.

Dutch crispbread..loved them since I was little and used to load them up with butter and tuna. Rusks are sweeter but just as lovely.
http://www.sainsburys.com/groceries/frameset/navigation_frame.jsp

I've never had these, i prefer the white chcolate spread which i think is called white chocolate pasta!? Anyway, nice blog... i found you through Amsterdamize.

It looks similar to melba toast.

Rusks, or Sainsbury's, our major supermarket, calls them Dutch crispbakes. My (almost) 7 year old loves them with hagelslag for breakfast. Even if he can't say beschuit (he calls them behuit) or hagelslag. I fed beschuit met muisjes to all my visitors when both kids were born (they were both born in the UK) and I got the very British response: 'interesting'. Which is synonym to 'I don't like this but I'm too polite to say'. I ended up eating beschuit met muisjes myself till the kids were about 8 months old!
I like beschuit crumbled over yoghurt with apple - instant crumble.

Hmmmm Hagleslag!
But I prefer my hagleslag on fresh crusty bread.

Beschuit are nice with goats cheese and honey.

Not fond of muisjes, but my nephew likes them in yogurt, odd kid!