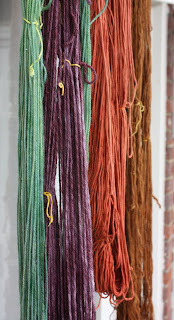 Yesterday, some of my knitting friends got together and had a little dyeing party. I'd never dyed before. It's one of those things I hear about on podcasts, but which sounds confusing, unpredictable and messy. However, since a space, dyes and the support of other people dyeing was being provided, I went.

We started off by using some natural dyes. Then we moved on to Kool-Aid and then I used some Ashford dyes, which are chemicals. 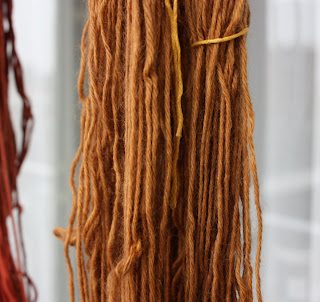 The natural dye was originally oak galls and then we added logwood, which was supposed to turn it purple. That didn't happen. It came out this light brown/golden color (It looks much more orange here than it actually is) on my yarn and just sort of messed with the other yarns, which varied from reds and oranges to white. The verdict of the other participants on it was "yucky." I was just happy that mine was no longer pale yellow. I've had some pale yellow in my stash for way too long. 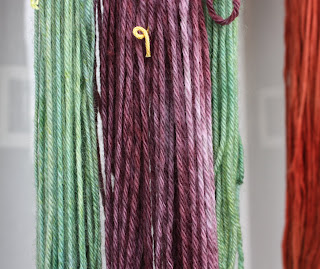 Kool-Aid is an amazing product. We'd heard a couple of different things about it, and some people had experimented with it. Malia got a shipment of Kool-Aid in and some of us played with that. Dagmar used some pink lemonade on a little handspun and then sat and knitted. (I know, right?) I took the last bit of a striped gray and beige monstrosity that Fred picked out years ago and used grape Kool-Aid on it. The yarn soaked it up really fast. It was like it was asking for it - Please help me stop being a boring yarn! Interestingly, the water becomes clear when all of the dye is soaked up in the yarn. One of those things you hear about, but it's amazing to see it happen.

The green is from some Ashford dyes that mix pretty much like paint. I used yellow and blue (you might want to write this down) to make green. It keeps changing as it dries. I like how green it is. I've heard you can't get a good green with natural stuff. 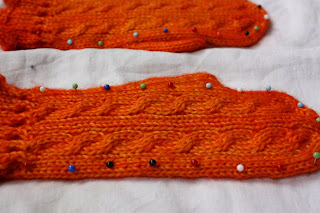 I used orange Kool-Aid on these Melina gloves that I made a while back. I wanted something bright since they'll be fore a child. I got it. Another interesting tid-bit is that Kool-Aid adds something called "LAKE" to flavors that it doesn't want to be completely clear. Hence, the water never turns completely clear. It was sort of a milky orange when I decided to call it quits and take the mittens out of the dye bath. They were put in the microwave for a couple of minutes (two minutes each time) to set the dye. Ever spilled Kool-Aid on yourself? I don't think the microwave is that necessary. And the yarn smelled like orange and grape when it was over, which made Cassandra a little ill. 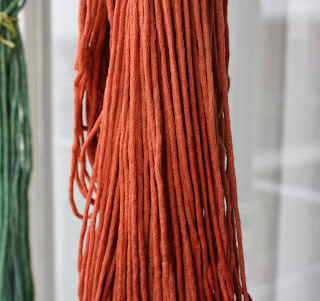 The last thing I did was take a fairly boring brown cotton yarn and used some red Ashford dye on it. It came out looking the color of raw meat when it was wet. As it dries, it's looking more and more orange. It'll be fine for a baby bib or something. The new color opens up some new options and I always think baby bibs when I see cotton.

Years ago, I did The Artist's Way with a friend in NYC. The author, Julia Cameron, is really big on having artist dates and doing creative things to get your mind thinking and get your creative juices flowing. It felt a little "bad" to do this yesterday. But I think it's really important to play and experiment and create. My life is certainly not the life of average 43-year-old man from my home town. This sort of stuff is part of the reason why.
Posted by Andy Baker at 5:49 PM

hello... you may submit this blog to my webBlog Directory, keyworddir.info.. have a nice day!

Yes I know, I sat and knitted. Obsessed by my Nancy Bush scarf. It's finished now. I can think of other things again.
By the way, I am really proud of my pink own handspun bulky mess :-)

A friend sent me some packets of Kool-Aid a while back but I have yet to venture into the world of dying..Im messy!

They're gorgeous! Everything turned out so much better than I would have guessed, and MUCH better than my circus train wreck.

Nice work, Andy. Normally, I just pop in and see what's up but I figured a comment is needed. I like dyeing but haven't the time for it. Isn't Kool-Aid a kick? I had a friend who wouldn't let her kids drink the stuff but had a big stash to color her handspun. LOL Take care. Joe-in Wyoming