Can I Bring Anything? 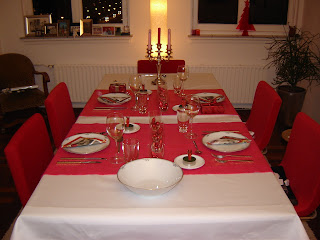 Years ago (in the mid-Nineties) one of my favorite shows (Northern Exposure) featured one of the main characters (Dr. Joel Fleishchman) preparing to throw, and then throwing, a dinner party. (And the over-use of parentheses.)

I thought of this last week when I ran into one of the guests and he said, "Can I bring anything?" As if on cue, and paraphrasing a line from the show, I said, "No, thanks. We've got everything covered." Similarly, when I'm invited to dinner, I'll ask, "Can I bring anything?" I suppose there are situations where it's fine to say, "We don't have a dessert. You could bring that." But I'd never do that. It's sort of a control thing.

Another thing Joel did was run out of wine. I'm a huge advocate of having enough of everything on hand. We're always stocked up for a party. Water might be a problem tonight, but if all else fails, we've got a couple of faucets that are good for that. Growing up, we drank iced tea at big dinners - Thanksgiving and Christmas. That seems so far away now. I'd be okay with drinking iced tea here, but we don't have the set up for that. We don't have the glasses, access to enough ice or those long spoons. So we have to drink wine...right?

One of the things I love about a dinner party is chopping all the stuff up. I've zested lemons, crumbled cheese, peeled potatoes and sliced onions for a couple of hours now. Fred's thing is the table. He enjoys setting a table. (That photo above is one of his from a couple of years ago.) And then when it's all done, there's a huge mess to clean up. There's even something fun about that.
Posted by Andy Baker at 4:49 PM

Well, it was certainly worth the effort - a lovely evening was had by all, I think.

I think you should serve sweet tea. Maybe not the syrupy church supper variety, but something just a touch southern to see what people say. If it's already sweet, you don't need those long spoons.

more meringue: here's a link to a pavlova recipe from the a bit dull but very reliable Delia...
http://www.deliaonline.com/recipes/pavlova,1219,RC.html