NOTE: There is nothing here but knitting today.
HOWEVER, Look at the pictures. I made some very nice snaps today. 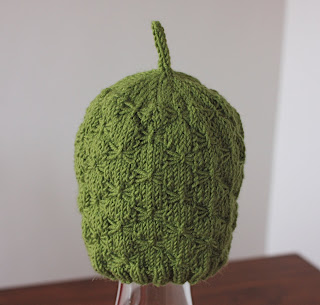 A couple of months ago, I traded some yarn to a knitting friend and she threw in a ball of GGH Merino Soft that happened to be one of my favorite shades of green. Then, another knitting friend offered to let me test knit a pattern that I liked. It's a baby hat. To me, baby hats are like a small piece of good chocolate. There good for a quick taste and over relatively quickly. I think there are a few alterations that need to be made in this pattern and then she's going to put it out there. It's a fun little hat. And the basic pattern - like most most basic patterns after you understand them - is easy to alter. I've already cast on for the next hat. 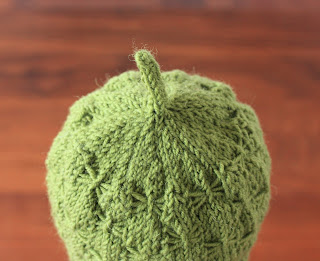 It ends with an eye cord stem, which I always like. I think the top of a hat is such a nice place to put a little thing. I've proved that a number of times on this blog. 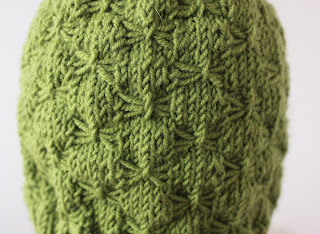 The little butterflies are nice too. I had no idea how they were done, but having done them now, It's completely obvious. They were the slightest bit tedious, but you don't have to mess with that part very often. And after you do it, it's not that much trouble. Fiddly, I believe I usually call it.

I have to say that I am crazy about this camera. On castover days in the afternoon - at our dining room table - it takes the best pictures. If you're still reading this, you might be interested to hear that I used 3mm needles (two circulars) and it took 22 grams of the wool.
Posted by Andy Baker at 4:32 PM

Havent been online for a few days (I have a shocking cold)but nice to read your posts as always. Love this pattern..tops marks for pretty knit