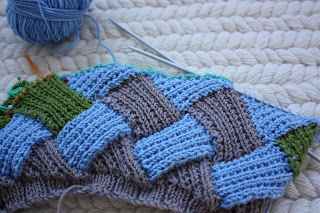 Warning: All knitting
Entrelac embodies one of the things I love about knitting. It looks comlicated or involved, but when you read it step by step how to do it, it's relatively easy. I like how involved I have to be when I'm knitting. There's counting and stuff. It's not just knitting. It's a lot of picking up stitches and decreases. I'm doing a lot with waste yarn to make it managable for me. The original pattern has everything on double points.

This is an idea that I'm working on because I had some left over balls of yarn. I'm sort of making this up. It was a sock pattern from Son of Stitch and Bitch that I modified to what I thought would be a baby hat. It still could be. I'll have to see how it looks when I do the decrease at the top. It might be a floppy baby hat. Different colors and a different stitch pattern would make it a little tighter and neater looking. I'm a little disturbed by the looseness.

Hats are the perfect project to try something out on. I'm a little bit addicted to them. Someone sent a link to The Red Thread Project. Maybe I'll send some of them there. Sounds a little fruity, but it's going to a good cause.

I have a friend who is going to only knit things next year that she designed herself. I would like to do something similar. I already modify things all to heck.
Posted by Andy Baker at 6:51 PM

Entrelac- I love entrelac! Looks cute so far. I'm just starting to put my toe in the pool of designing, it does seem like a natural enough step after making a lot of mods. Are there any 'Andy-designed' patterns in the future??

you are a very good knitter. please show us the finished product.