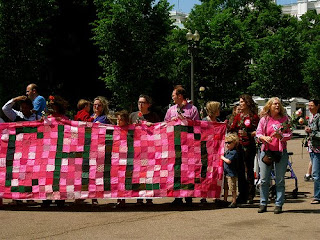 I swiped this from a Flickr page. Alex wrote on her blog recently about this action that was put on by Code Pink. It happened on Mother's Day at the White House. People from all over the world were asked to send in 4 inch by 4 inch knitted or crocheted squares in pink and green that would be put together to make a giant quilt that would be displayed in front of the White House on Mother's Day. The whole banner says, "We will not raise our children to kill another mother's child." (Julia Ward Howe, in case you were wondering.)

Ginni from our knitting group got us to commit to twenty squares. I knit four green squares. After four, I realized that I hate kitting little squares. I kept trying to think of a way to make a lot of them without having to cast on and off. If I could have knit a scarf that was like three feet long and then steek it, I could have doubled my output - at least. But casting on, knitting a bit and then casting off those silly things? No thanks! I'm sure there were no rules for that. They would have taken steeked squares, but I didn't think of it until I was sick of the project. If I would have had a serious challenge, I would also have done a lot of them. I had no takers. When Ginni brought it up, people were like, "Yeah...I'll do one." 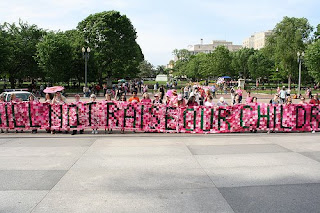 The only rules were green and pink. You can see how many shades there are. It's sort of hard to read from far away. And I blocked mine. Some people (I'm not naming names) didn't block or pay attention to the size request. I sewed in a few ends before Ginni sent them off. Can you imagine sewing those together? I bet someone grabbed a stapler before it was finished.

This action didn't get any press here. I didn't see anything. It's sort of a nice idea, but I kept wondering what they were going to do with the quilt after the action was over. Seems like you could take it apart and make blankets for homeless people out of it. Or baby blankets or something. It almost seems like a waste. Do something with it.

My enthusiasm for this project is questionable. Am I hiding that at all?
Posted by Andy Baker at 7:19 PM